Religion has played an integral role in India’s history and culture. In fact, India has been the birth place of some of the major religious traditions in the world, namely, Hinduism, Jainism, Buddhism and Sikhism. Over the centuries, India’s dynamic culture has first welcomed and then imbibed foreign religions like Islam, Christianity, Zoroastrianism and Judaism with such respect and love that allows them to thrive in modern day India. For most part, the people of India are tolerant and retain a secular outlook and most communal clashes are instigated by politics rather than ideology.

This vast religious spectrum in one country results in myriad sites of pilgrimage, each more enchanting than the other. Consequently, religious tourism in India is a thriving industry. Here are some of the must see religious destinations in India: 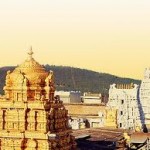 Tirupati – Also known as Temple City, Tirupati in Andhra Pradesh is the second largest pilgrim centre in the world after Jerusalem and is the largest pilgrimage for Hindus. It is famous for the Sri Venkateshwara Temple dedicated to Lord Vishnu and the city is mentioned in the ancient holy texts of Vedas and Puranas. It is believed that worshipping at this temple enables the attainment of Mukti or Nirvana in this age. Interestingly, owing to the widespread donations it receives, Tirupati is one of the richest religious organisations of the world. 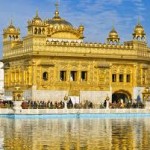 Golden Temple – A prominent Sikh gurudwara in Amritsar, Punjab; the Golden Temple is also known as Harmandir Sahib, which literally means Temple of God. In its sanctum, it houses the Adi Granth which comprises the compositions of Sikh gurus and other saints and is considered to be the epitome of Sikh philosophy. The temple is surrounded by a large lake known as Sarovar, waters of which are considered holy. The four entrances to the temple signify the importance of acceptance and openness and the complex has shrines to many Sikh gurus, saints and martyrs. Giving the temple a distinctive appearance, the upper floors of the gurudwara are covered with gold. 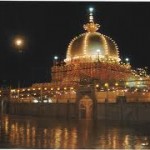 Dargah Shariff of Hazrat Khwaja Muinuddin Chishti – On the foot of the Taragarh hill in Ajmer; lies Khwaja Muinuddin Chishti’s tomb. He is known to embody peace and harmony and has been one of the greatest spiritual redeemers of human suffering. This dargah is therefore considered one of the holiest places in the country, not only for Muslims but for all who hold the saint in high esteem. Apart from the spiritual import, there are many precious buildings, gates and mosques that make for wonderful tourist attractions. 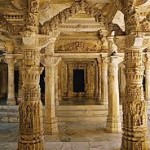 Dilwara Temples – A mere 3 kilometres from the beautiful town of Mt. Abu, are the beautiful Dilwara Temples built in 11th and 12th century AD. The 5 temple cluster is made completely in marble and archaeological evidence shows that Lord Mahavira himself visited the site, making it especially sacred to Jains. Each temple is known for its unique identity and is dedicated to different Jain Tirthankars/Saints. The Vimal Vasahi (dedicated to Lord Rushabha) and Luna Vasahi (dedicated to Lord Neminatha) temples are the most famous amongst the five. 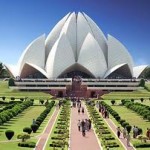 otus Temple – The Bahai House of Worship, popularly known as the Lotus Temple owing to its flower-like shape is a prominent tourist attraction in New Delhi. The Bahai laws state that a house of worship should be nothing but a gathering space where people of all religions may worship God without restrictions. The ambiance within the temple is serene, peaceful and welcoming. Even if you’re not spiritual, it’s a place worth visiting. 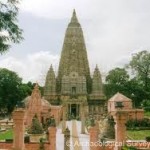 odh Gaya – The place where Siddartha Gautama became Buddha while he meditated under the Bodhi tree in Bihar is one of the most revered destinations for Buddhists across the world. The accompanying Mahabodhi Temple Complex in Gaya was built about 250 years after Buddha attained enlightenment by Emperor Asoka. The temple is one of the oldest brick structures to survive and it’s central tower is about 55 meters tall and is gorgeous. 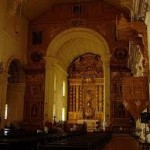 illica of Bom Jesus – The church of Bom Jesus is known principally for the tomb of St. Francis Xavier. In 1946, it became the first church of India to be elevated to the status of Minor Basilica. It is one of the richest churches in India and is covered with marble and inlaid with precious stones and has paintings that depict the life of St. Francis Xavier. It is the best specimen of Baroque architecture in India. St. Francis’s body was brought to Goa almost 150 years after his death and was a gift from Medici Cosimo III, The Grand Duke of Tuscany. It now lies in an airtight glass coffin, inside a silver casket fashioned by a 17th century Florentine jeweller.