30 minutes from the city of Bikaner, hides the Gajner Palace, a magnificent heritage hotel constructed of red sandstone on the banks of the gorgeous Gajner Lake. The Palace was originally built by HH Maharaja Sir Ganga Singh of Bikaner who ruled from 1887 to 1943 and was converted into a hotel by the HRH group of Hotels in 1976.

The hotel compound stretches over 6000 acres and was originally the hunting lodge for the king and glamourous British dignitaries. It was so popular that the lodge was connected by rail to the Bikaner Palace in 1922 and the palace complex still houses remains of the railway station. 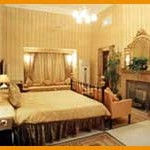 Like most palaces and forts in Rajasthan (or for that matter, India), the palace is an architectural delight and has especially distinctive terraces and balconies. Today, the hotel is divided into four wings. The most prestigious Dungar Niwas houses suites which used to play host to the most elite guests. All thirteen suites have been painstakingly restored to their original grandeur while incorporating various modern comforts. Gulab Niwas used to host railway officers while Mandir Chowk was a part of the reception area for dignitaries arriving by train and has a ancient temple and banyan tree adding to the charm. Champa Niwas is the newest addition to the palace and has rooms surrounding a charming courtyard. There are another thirty two deluxe rooms to be found in these three wings.

The palace compound also has its own private wildlife sanctuary which provides shelter to endangered animals like the chinkara, black buck and nilgai. During the winter months, the lake is home to over a hundred migratory birds, including the Imperial Sand Grouse. The view of and from the palace is simply awe-inspiring. 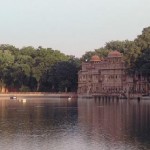 Apart from history and beauty, the hotel provides many other services. They have a multi-cuisine restaurant, indoor and outdoor sports like billiards, lawn tennis, cycling, boating etc. Jeep, horse and camel safaris as well as bird and wildlife spotting are also available. The hotel also has an amphitheatre that can accommodate about 150 people.

The hotel is luxurious and glorious and definitely a must visit.