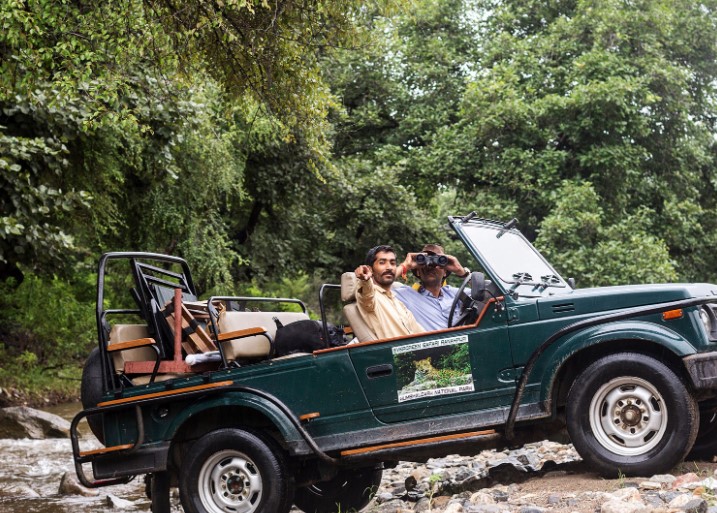 Nature lover, wildlife enthusiast, or simply an explorer you will love this mixed list of popular and offbeat locations from Rajasthan’s Wildlife Reserves!

Located about 32km from Bikaner, surrounding the Gajner Palace which has been converted into a hotel. Once inside you will love this secluded lake-side sanctuary that was a favorite haunt for the former Maharaja of Bikaner. If you are currently staying in resorts near Jodhpur, this glorious lakefront palace is not to be missed!

In the summer there are plenty of sightings here of the animals that come out to quench their thirst at the lake. The Wildfowl, Deer, Antelope, Nilgai, Chinkara, Black Buck, Desert Fox, and Wild Boar; along with a variety of birds are all part of the fauna that this sanctuary draws. Gajner Sanctuary has also been proposed for the relocation of Cheetahs to provide them a safe haven. So hopefully you will be spotting this spotted beast here in the future!

Head on over to Todgarh Raoli Wildlife Sanctuary that is about a 100kms from Kumbhalgarh Fort. If you are looking for places to visit near Kumbhalgarh, then we suggest you do stop over at this hidden gem. Established in 1983 this sanctuary covers approx.500 km2  of forests and grasslands. Smack in the middle of the Aravallis, it is based near the village of Todgarh.

Wildlife species like Leopard, Wild Boar, Chinkara, Common Langur, Sloth Bears and Indian Wolf, are found here. Since this sanctuary covers the districts of Ajmer, Pali and Rajsamand it has a wide variety of flora too.

Nature lovers would love to visit the 55-metre high Bheelberi Falls here, most active in the monsoon season. Situated in the Bhagora Forest, this has been the resting place of the endangered Roosting Long-Billed Vultures. One can even reach this waterfall via a 4km jeep trail. Also home to the Dudhaleshwar Temple with an ancient shivling, that has a perennial source of spring water. You can also visit inside this sanctuary a historical place that is renowned for Maharana Pratap’s feat over Akbar’s army, called “Dewair ”.

Todgarh Raoli sanctuary is also one of the places to visit near Ranakpur, being about 114kms apart. We suggest you visit this offbeat place for an unusual experience of our Incredible India!

Rajasthan’s only hill station also supports a most versatile ecoregion that was declared a wildlife sanctuary in 1980. Home to a wide diversity of trees and also one of the few places in the state where we can find orchids and bamboo trees.

You can book Jeep Safaris and Wildlife Tour packages in advance online or when you arrive here. With many scenic and famous resorts in Rajasthan located in Mt. Abu, we do recommend visiting not just to enjoy the acclaimed pristine sunsets here but also for the sublime peace and tranquility this place echoes with.

Located in the Alwar District, this one is a tourist jam that has given many a glimpse of the Royal Bengal Tiger. Being declared a wildlife reserve in 1955 and a Tiger reserve in 1978 (as part of India’s Project Tiger), made it the first reserve to have successfully recorded the relocation of this prized animal. After 1990 when it became a National Park it also gained importance for the presence of the Northern Aravalli Leopard that flourished here. The Leopards and Jackals in this sanctuary have been marked with collars so as to easily locate them when they traverse into human occupied areas.

Being only 200km from Delhi and 100km from Jaipur makes it one of the most easily accessible reserves for the wildlife enthusiasts who visit here. Also it offers some of the best hotels in Rajasthan, that take care of their guests in the wilderness.

This sanctuary is in close proximity to the Bassi Fort Palace located in the Chittorgarh district of Rajasthan. Established in 1988 with more than 15,000 hectares of land, the Bassi and Orai dams are also a part of this. Of the animals that have been regularly spotted here are the Antelope, Wild Boar, Crocodile, Panther, Mongoose and Migratory birds. Nevertheless it has played host to the Indian Leopard, Jackal, Crane, Wild Cat, Civet, Chinkara, Chital(spotted deer), Porcupine, Hyena, Langur, Fox, Blue Bull as well.

An untouched location with very few tourists visiting here, which is why it is sure to give you glimpses of nature at its wildest. Located not too far away from the resorts near Udaipur, the most accessible and comfortable accommodations for visitors who come to explore the remote Bassi badlands.

Located in the Sujangarh Tehsil and Churu district, it is renowned for the Indian Blackbuck. Only 210 kms from Jaipur and 130kms from Bikaner it is on the Ratangarh-Sujangarh Road. This is certainly an offbeat reserve to visit in Rajasthan. Known as ‘Tal’ because of it being a flat saline landscape with shallow low lying areas located at the periphery of the Great Indian Desert. It is a refuge for the Indian Blackbuck, and a perfect ecosystem for the animal to camouflage itself in these savanna-like grasslands. Only here a special type of grass is found that is food for both humans and the blackbucks. This grass is called Mothiya by the locals due to the seeds having a pearl-like shape and contour. With a slightly sweet taste it only grows about a few kilograms every season.

If you are an avid birder you should know this sanctuary is home to many rare migratory species like the Montagu’s Harrier, Marsh Harrier, Imperial Eagle, Short-toed Eagle, Sparrow Hawk, Skylark, Ring Drove, Blue Jay, Southern Grey Shrike, and Demoiselle Cranes.

Named after the Ranthambore Fort, which is located inside this national park, it is most famous for its Tiger and Leopard sightings. Inside are also some ancient Jain temples and three Red Karauli stone temples of the Hindu deities Lord Ganesh, Shiva and Ramlalaji. But nature enthusiasts come here in large numbers to witness the spectacular Bengal Tiger that resides along with the Indian Leopard, Nilgai, Wild Boar, Sambar, Striped Hyena, Sloth Bear, Langurs, Mugger Crocodile, Rhesus Macaque, Crocodiles, Tortoises, Indian Python, Russell’s Vipers and Chital. Sitting on top of the food chain hasn’t helped the Tiger, as this notorious cat’s lives have been dwindling due to poaching and other reasons.

Despite low numbers this animal draws a heavy footfall to the reserve making Ranthambore the most famous national reserve in Rajasthan as well as one of the busiest National Tiger Reserves in India.

Located in the Rajsamand District it is spread all around the old Kumbhalgarh Fort. Covering many parts of the Pali and Udaipur Districts, about 22 villages reside inside this sanctuary. Since it is easily accessible from Udaipur(100km), Nathdwara(51km) and Ranakpur(49km); we recommend this popular place that you can explore while trekking on foot or riding on Horse, along with the Jeep Safaris offered here.

The ecoregion mostly consists of Aravalli Hills, so it was once considered as a suitable habitat for the reintroduction of the Asiatic Lion in 2009; unfortunately that project had been shelved. Many wildlife species including the Indian Leopard, Indian Wolf, Sloth Bear, Striped Hyena, Golden Jackal, Jungle Cat, Sambhar, Nilgai, Chausingha, Chinkara and Indian Hare are found here. The alpha predator here is the Indian Leopard, a fascinating beast for wildlife lovers tracing the popular Indian Leopard Trail.

If you are surfing the net for Kumbhalgarh resort packages, we suggest you book weeks in advance. The hotels in Kumbhalgarh are mostly preoccupied as visitors throng here throughout the year. It is one of the best places to visit in Kumbhalgarh, but for more comfortable accommodations we suggest you look up the well-furnished Ranakpur resorts as many of the foreign tourists prefer them.

If you are looking for a short weekend getaway then this last location is sure to be a spine tingling one! Built on the Jawai River this is the biggest dam in Rajasthan and one of the most rugged parts of Pali, Rajsamand, and Udaipur districts. It has gained popularity for the Jawai Leopard sightings here, primarily as the locals were part of the wildlife conservation efforts. The local Rabari herdsmen consider the Jawai Leopard a holy creature. Since this is not an established wildlife sanctuary, the animal can be spotted near human settlements cohabitating almost harmoniously. The Indian leopards mostly reside on the trees but here the Jawai takes shelter among the granite rocks of the terrain. This area with its strategic location has pleasant weather throughout the year.

For staycations visitors prefer the resorts located among the idyllic scenery of Ranakpur, that is only 47kms from the Jawai Bandh area. We suggest you stay at Mana Resorts, Ranakpur. It is one of the best resorts in Rajasthan and they offer premium services of Day and Evening Safaris for exploring the Jawai Bandh, with utmost regard to conservation efforts and respecting the animals’ space. The Jawai Leopard Trail is currently one of the most trending wildlife safaris in India, with many enthusiasts spotting the Jawai Leopards and having a thrilling adventure!