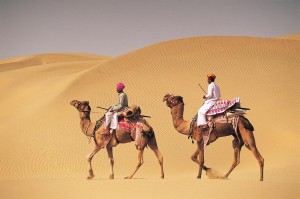 Despite having a largely tropical desert climate, Rajasthan has always been popular amongst tourists. That’s how amazing its history and culture are! While October to February can be really chilly, the scorching sun is harsh between March and September. Rajasthan’s climate ranges between two extremes so plan your visit carefully!

A warm and dry climate is the hallmark of Rajasthan, marked by distinct temperature changes between day and night as well as seasons. March sees the onset of summer as the mercury soars gradually but surely through April, May and June. In Western Rajasthan and the Eastern side of the Aravalli Range (in Bikaner, Phalodi, Jaisalmer and Barmer) the maximum temperature can be anything between 40°C to 45°C. While the summer day is sweltering, the nights are cooler with the mercury hovering between 20°C and 29°C.

During the winters, January is the coldest. The temperature can fall below zero at night in Sikar, Churu, Pilani and Bikaner. The sandy land gets even colder with occasional secondary Western winds that cross western, northern and eastern Rajasthan during winter months, bringing with them a little rainfall and really chilly winds. Barring Kota, Bundi and Baran and western Barmer, most of Rajasthan has an average temperature of more than 10°C. A cold wave, lasting for two to five days, is also a regular phenomenon during winters.

Rajasthan’s climate varies mostly from arid to sub-humid. The area which lies towards the west of the Aravallis has scanty rainfall, extreme temperatures, low humidity and dusty, high speed winds. The eastern side, however, experiences lower velocity winds, higher humidity and better rainfall; and the climate is classified as semi-arid to sub-humid. The pattern of annual rainfall in different parts of the state are varied. The average annual rainfall ranges from less than 10 cm in north-west part of the Jaisalmer region, to 20 to 30 cm in the regions of Ganganagar, Bikaner and Barmer, 30 to 40 cm in the regions of Nagaur, Jodhpur, Churu and Jalor and more than 40 cm in the regions of Sikar, Jhunjhunun, Pali and the western fringes of the Aravalli range.

The more fortunate eastern side of the Aravallis sees 55 cm rainfall in Ajmer to 102 cm rainfall in Jhalawar. Mount Abu in the southwest is the recipient of the highest rainfall in the state (163.8 cm). June marks the beginning of the Southwest Monsoon in the eastern parts which culminate around mid-September. The middle of June witnessed pre-monsoon showers which provide welcome relief from the often cruel heat. Rajasthan also receives rainfall during winters owing to the Western Disturbances over the region. Be that as it may, July and August remain the two months during which Rajasthan receives most of its monthly rainfall.