Udaipur | The Venice of the East

Udaipur, which literally means the “city of dawn” is nestled in the beautiful region of Mewar amidst the Aravallis. One of the most romantic locations in Rajasthan and in India, the beauty of the place is accentuated by the azure lakes, stunning palaces and magnificent forts. Popularly known as the Venice of the East, the city has a unique charm that attracts visitors not only from India but from all over the world. It is one of the most preferred locations for several couples for their honeymoon or to spend a romantic vacation. While the alluring palaces give the tourists a feeling of being the royally themselves, the scintillating lakes of the city fills their heart with pure joy.

If you have read the fairytales and  beautiful lands they lived in, you can see them all in real here. If you are on a vacation with your loved one and wish to make her/him skip a beat and pop that ‘will you marry me?’ you could not ask for a better location than Udapir. Your immense love and the lovely surrounding will surely sweep her off her feet and it would be impossible for her to say NO. Every palace, temple, fort and lake in the city has its own story and significance. If you are in the city, there are certain lakes you cannot afford to miss: 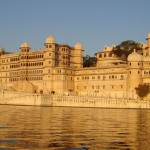 Pichola Lake is one of the most popular tourist attractions of Udaipur. It is one of the most picturesque lakes in India. Located at the heart of the city, this lake was built in 1362 by Pichhu Banjara. The lake that runs 3 miles in length and 2 miles in width is among the oldest and largest lakes in Udaipur. Pichola Lake is surrounded by beautiful gardens, temples, havellis and ghats. In 1899, Rudyard Kipling mentioned the lake in one of his ‘Letters of Marque’, where he wrote, “If the Venetian owned the Pichola Lake, he might say with justice, ‘see it and die’”. 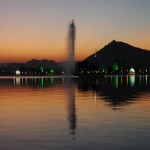 Located in the north-west of Udaipur is second largest artificial lake. The lake was initially built by Maharana Jai Singh in 1678 but was partially destroyed due to heavy rains in the regions. It was then rebuilt and extended by Maharana Fateh Singh. Spread over an area of 1 sq km, it is connected by a canal to Lake Pichola. It is a popular tourist spot as people come here to relax and spend a leisure-filled time. You can also hire pedalled boats to see its tranquil beauty from close quarters. 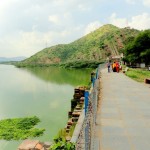 This is another popular lake of Udaipur. The lake located about 13 km from Udaipur on the east side of city was built by Maharana Udai Singh mainly to ensure that there was sufficient supply for water in his kingdom. Except in the extremely hot summer months, the lake is full with water almost all year around. People visit the place to enjoy its serene water.