Top 5 #summer #drinks to #survive the summers in #Rajasthan

Those of you who have never been to Rajasthan do not know how cruel the Indian summers can get. Hot winds blowing at 45 degrees Celsius combined with the arid dust blown in from the nearby Thar Desert can easily cause heatstroke and other illnesses.

There are many commonly known techniques recommended to those visiting the royal desert for the first time. These include the right diet, the right choice of wardrobe and skin care tips, all designed to minimize the impact of the heat. However, one of the most important aspects of surviving the heat is consuming the right beverages.

Beverages are a combination of three things – condiments (sugar, spices, salt), the main ingredients and of course, the temperature.  With the exception of green tea (which is not native to Rajasthani cuisine), they are all served at ice-cold temperatures to instantly cool the body down. 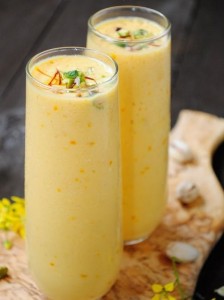 This blended yogurt drink is a popular thirst quencher for those who have survived the day’s heat. Yogurt is blended in sugar and iced-water. After it becomes creamy (and therefore the name “Makhaniya”) cashews, pistachios and more cream is added to it. Rose water, known for its cooling properties, can also be added.  As it is very thick, it often serves as a substitute for desserts!

The world’s favorite thirst quencher is not Coke, Gatorade or beer- it is the lemonade. Locally known as Nimbu Shikanji, it is a hit with those who frequently venture out in the sun. While lemon’s Vitamin C is vitalizing, the ice cold water instantly cools you down, and the presence of black rock salt immediately replenishes the electrolytes that your body might have lost in the summer heat. Variants made with carbonated water are also popular. 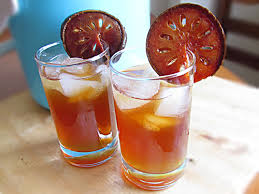 Also known as wood apple, the Bael Juice is a native drink of the subcontinent, and is considered sacred in the Hindu religion.  It is one of the most effective tools to fighting the various ailments caused by the summer heat, including stomach issues.

Not only is it commonly recommended for heat strokes and dehydration, but the medical properties of Bael make it an essential summer drink. The antimicrobial properties of Bael (this includes not only the fruit, but also the trees leaves and roots) check infections resulting from viruses. As a summer thirst quencher, the fruit’s pulp is extracted, blended in water, and served with jaggery and salt. Its high calorific content (100 grams of fruit offers 140 calories) and chemical properties boost metabolism, helping the body in rapidly fighting off any damage caused by heat stroke.

The sherbet of rose (known for its cooling properties) served with crushed ice. It can be had with water, milk, or even added to other preparations for flavor.

This soothing salty butter milk drink is similar to a lassi but a lot less thick. It is very good for digestion and acts as a coolant for the body during summers. Salt and cumin seed are usually added with fresh coriander as a garnish.