To understand a place and its people, it is necessary to understand the plethora of factors that have influenced its culture and had a hand in shaping it into what it is today. A society’s conditioning gets affected by its age, socio economic factors, political leadership as well as natural environs. When one considers Rajasthan in the context of all these elements, the revelations are mesmerising.

Rajasthan is an ancient land of wonder where myths and legends continue to lend an undeniably mystical ethos to the everyday lives of its people. Bardic and oral traditions continue to thrive in the region and stories of the valiant exploits of daredevil Rajputs and their exceptionally proud and determined women continue to be passed down from one generation to the next. At the core of it, the people of Rajasthan continue to value and embody the romance and chivalry; and honour the history and legend of their land.

A landscape as monochromatic and oppressive as that of Rajasthan’s could easily overshadow and quell the spirit of its people. Yet, what we find in Rajasthan is a different story altogether. The adversities of the land have instead made its people resilient, an attitude reflected in the bursts of colour that adorn them. Living in small hamlets surrounded by an endless sea of shifting sand are extraordinarily talented artisans and craftsmen with inspiring aesthetics. Rajasthan produces a rich variety of textile (most of often coloured in bright hues made from vegetable dies), ornate leather ware, exquisite jewellery, elaborate stone carvings as well as beautiful paintings which adorn the walls of the royal palaces.

However, historically, martial tradition is foremost in this region. Having descended from the Aryan warrior tribes of Central Asia, the people of Rajasthan echo the characteristics of their origins. As settlements grew, the very presence of varied races brought about the creation of a more structured social system, the classifications of which are known as castes. 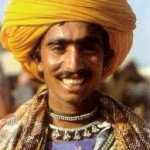 The Minas are a legendary tribe and perfect examples of fierce warriors and loyal soldiers. Traditionally, they are retainers of the Rajput royal houses and believed to be descendents of the original Harappan people. Bound by an iron code of loyalty and secrecy, they were custodians of Amber’s cast treasures hidden at Jaigarh Fort. Legend has it that even today, only the Mina guardians know where the treasures are. 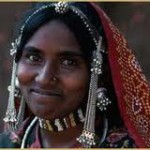 The Bhils are another prominent tribe of nomadic and fierce fighters who were feared for their skills at archery and ability to fight in the hills. However, they were overcome by the Aryans and retreated to remote areas where they live till today. 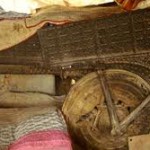 adia Lohars are the nomadic ironsmiths. These turbaned men and women in flared skirts or ghaghras are a familiar sight in northern India and travel in ornate iron carts.  Legend has it that when Chittor was lost by Rana Pratap to Akbar, the Gadia Lohars vowed never to return until the throne was won back. As it happened, the Guhilots (Rana Pratap’s clan) built a new capital at Udaipur and since then, they have never returned to Chittor. In recent times, they have refused all offers of land and rehabilitation, sticking to their nomadic ways. 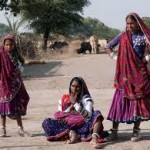 Lord Krishna. Historically, they traded in salt and it is said that they helped Alexander to cart his booty off India. The Bishnois on the other hand are a passionate group of nature conservationists by tradition. Their efforts to preserve trees and wildlife in Rajasthan has recently won them worldwide attention and any Bishnoi settlement, usually found between Jodhpur and Bikaner will be a green fertile oasis in the sands of the Thar, surrounded by forests that are inhabited by deer (which they consider sacred) and peacocks.