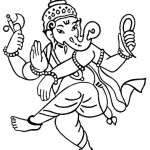 It is impossible for any culture to ignore a creature as enormous and impressive as the elephant. In India, elephants have been regarded as precious and majestic since the Puranic era. The relevance of the Elephant in Hindu culture is apparent from the physical form of Lord Ganesha, who has the head of an elephant and the many references to elephants in the Ramayana and Mahabharata.

In Rajput culture, elephants played a very important role as a symbol of royal strength and wealth. They have been seen as the royal mount since time immemorial and have been a mainstay in Rajput armies since the time of the Pandavas. Elephants have, for the longest time, been an integral part of all royal pageantry in India. 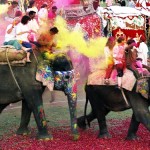 Over time, as most things symbolic in Indian culture, elephants have lost their place. Human encroachments in their habitat and poaching have resulted in a steep fall in the elephant population and they have been reduced to beasts of burden. 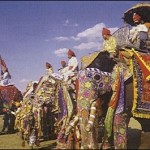 About a decade ago, the Government of Rajasthan instated an annual Elephant Festival in an attempt to display the past glory of Elephants to tourists. The Festival is held on Holi at the Chagan Stadium in Jaipur.

The Festival usually begins with a grand procession of ornately decorated elephants, camels and horses and prizes are distributed for the most beautifully ornamented elephant. This is followed by vibrant performances by the folk dancers and singers native to Rajasthan. Elephant races and the regal sport of polo, usually played on horses, is played on elephants on this day. However, the most crowd pleasing event of the day is the tug of war between an elephant and some awfully brave men and women! At the close of the day’s festivities, the elephants participate in playing the colourful festival of Holi. Interestingly, only female elephants are permitted to participate in the Festival. 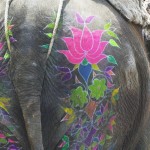 The Elephant festival is one of the many such efforts made by the Government of Rajasthan to display its state’s vibrant culture. This year, the Elephant Festival is to be held on 19th March, 2010, 4 p.m. onwards. There is no entry charge to the event.