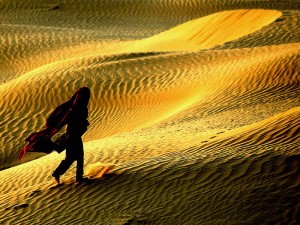 Thar, the Great Indian Desert, is an enormous unending expanse of burning hot sand which spread over parts of Western India (mostly in the state of Rajasthan) and Eastern Pakistan. The arid region extends in an area that is 800 km long and 400 km wide. The desert is bordered by Indus and Sutlej rivers in the west and flanked by the Aravallis in the east.

It is believed that ages ago, Lord Rama drew an arrow in the bow which was aimed at Lanka. The Gods knew of the destructive power of Lord’s arrow and pleaded Him to desist from His intended purpose. Now the arrow had been drawn and it couldn’t be pulled back and thus Rama pointed the arrow to a far-flung sea. The heat generated by the arrow dried the sea and in its place arose a dry, arid and hot desert which is today the Thar Desert.

Life in the Thar

The Thar is one of the most inhospitable landscapes on the earth. This ancient desert is also believed to have been a witness to one of the earliest human civilizations. The distances between hamlets and settlements are huge. The landscape, made up of sand dunes, keeps shifting as strong winds and sandstorms re-arrange the terrain at will. Scarcity of water is the biggest handicap in the region. The search for water causes the villagers to travel on foot for many kilometers. Community workers also here live and work in this vast, arid, sprawling and shape-changing environment. The agriculture is mainly built around Kharif crops. The life goes on against all odds. Life is indeed a struggle but the villagers have a very strong sense of attachment to their homes and culture.

The Thar Desert is an emerging tourist destination. In stark contrast to the deserts like Sahara and Kalahari, the Thar teems with life, culture, and vibrance. It has a rare, inexplicable beauty in its vastness. Bikaner, Jaisalmer and Jodhpur are the major cities of the region. The life in the villages vibrates to the sound of music. Sturdy men with moustaches in colorful turbans, cheerful women and kids live life to the hilt. In the evening, after a day of hard work, there is joyous dancing, singing and other community festivities and the hard working people of the Thar morph into fun-loving and carefree individuals. Many desert camel safaris are organised in the region which give an insight into the lives of the people and settings of the place. Traveling on the ship of the desert, the tall and mighty camel, one comes across typical lifestyles, culture, forts, castles, cuisine, desert safaris, customs, mysteries, stories and experiences.

Jaisalmer lies in the heart of the Thar. Huge sandy stretches, from which emerges the stately fort of Jaisalmer, have lent the city the sobriquet of the ‘Golden City’. 19th century havelis, carved from golden-yellow sandstone bestow a unique charm to the city. Bikaner is another important city of the Thar which boasts of massive sand dunes, marvelous palaces and temples and other archaeological treasures. Bikaner is also famous for sweets and snacks (namkeens). Numerous desert festivals are organised in the cities and villages which are melting pots of different performing arts: dance, folk dance, songs, poetry and music. Sri Ganganagar, Hanumangarh, Jodhpur and Barmer are other important cities of the region.

The Thar narrates the tale of man living in perfect harmony with a hostile nature. The people of this area have developed a culture that is simple yet impactful and at ease with the surroundings. The people are fiercely proud of their roots and traditions. This unique desert cannot be explained. Only by coming and seeing can the stranger absorb its rare beauty.