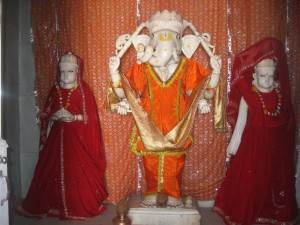 One of the must-see temples of Ghanerao is the awe-inspiring Gajananda Temple, dedicated to Lord Ganesha. The inner sanctum of this temple has intricately carved life sized marble statues of the Lord with his wives; Ridhi (who represents prosperity) and Sidhi (who represents spiritual prowess). These statues  are flanked by those of Hanuman and Bhairon (an incarnation of Shiva), as if they are being guarded.

Lord Ganesha is amongst the best known Hindu deities. With the head of an elephant, he is the most recognisable Hindu God. Devotion to him extends beyond religion to Jainsim and Buddhism and beyond regions to Nepal, Indonesia, Japan and other neighbouring countries. He is known as the remover of obstacles and the lord of all beginnings and is loved and revered by all.

The Gajananda temple in Ghanerao is one of those relatively undiscovered places where significant traces of religion, culture and skill are hidden away in sleepy towns of rural India.