Khajuraho in Madhya Pradesh, is famous for a distinct pattern of art and temple architecture. Created in the 10th – 11th century, the magnificent sandstone temples in Khajuraho have beautiful ornate carvings, which depict men and women in their everyday life, reminding one of the rich and creative period during the Chandella rule.

The Khajuraho temples were built over a span of 200 years, from 950 to 1150. Today, of the original 85, only 22 have survived the ravages of time and are scattered over an area of about 20 square kilometres, these remain as a collective paean to life, to joy and to creativity; to the ultimate fusion of man with his creator. Around 10% of the carvings on these temples display sensuous themes.

There are many schools of thought around the erotic carvings in Khajuraho. One theory says that the erotica on the walls of Khajuraho had a specific purpose. In those days boys lived in hermitages, following the Hindu law of being “brahmacharis” until they attained manhood. The only way they could prepare themselves for the worldly role of ‘householder’ was through the study of these sculptures and the earthly passions they depicted. Another theory suggests that the creators of Khajuraho claimed descent from the moon, found Chandella dynasty and built temples that would reveal human passions, and in doing so bring about a realization of the emptiness of human desire. 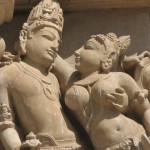 One must also visit the ancient Jain temples to see their exquisite architecture and carvings. Next on your to-do-list should be a visit to the breathtaking Raneh Falls, a natural waterfall on the Ken river. The river forms a 98 feet deep canyon made of granite in different shades of colors, such as pink, red and grey. One gets to see various waterfalls wherein the larger and small falls run throughout the year and the others appear only during the monsoons. 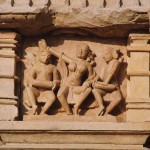 You must also visit Panna National Park, which offers both day and night safaris. Get ready to jump in your jeeps with your hats and cameras for a great jungle experience and who knows, you might get to see some tigers!

The temples, maintained by the locals, 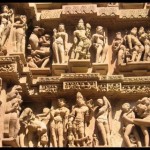