The narrow road from Ranakpur to Sadri is lined with small temples every few meters. Also, the bright red, yellow and white pagdis are not to be missed as are the colorful tribal outfits worn by women. 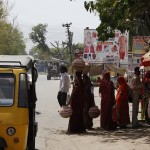 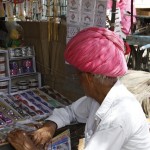 Sadri, a seemingly popular commercial centre of the Ranakpur area, greets you at the chowraha, or the town centre with a multitude of color and shops around with saleable ranging from kitchenware, fancy clothes and general ware to traditional ware and jewellery. Mr. Mukesh Kumar, a journalist with Rajasthan Patrika and a resident of Sadri says that Sadri was once known for its goldsmiths. But these have all now left the business, since artificial or machine-cut jewellery took over.

The mini township is equipped with the indigenous Indian Sanitary system, wherein at both sides of the road there flows a narrow stream of drainage water, passing from under the steps of the shops and the houses.

In this village of majorly working class people and people involved with farming, Jains are the dominant clan, followed by Maalis, Jaats and Chowdharies. This place is also home to the greatest Bahamasa tribe of Rajasthan, as one Mr. Jain, who is a native of Sadri and now lives in Chennai with his family observes on a visit back home to the village.

This is also a place, which gave birth to the originators of commercial giants in the country like Cello, Killer Jeans and Bharat Plast among many others. But, all these business families have now moved out of the village. 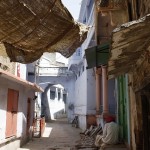 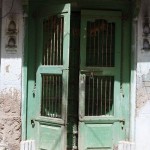 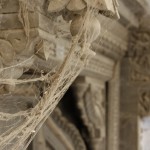 The multihued town of Sadri actually looks like a huge painting; it is near impossible to find so many colors at a place at once-colorful houses, colorful clothes and colorful jewelry. The colorful houses with blue walls and green wooden doors are bliss to look at. The walls of the narrow, dwindling, twisting and turning by-lanes of the village are adorned with spiritual messages and messages praising the Mother Cow. The traditional colorful ghaghara-cholis will not miss your eyes; complete with the thick white bangles adorning the ladies’ arms right up till the shoulders, reminding you of Dimple Kapadia from the National Award-winning film Rudaali.

These lanes are abundant with many Jain and Hindu temples; among these one of the more famous ones is the Mahavir Kaanch Ka Mandir, a Jain temple with walls made of artistically designed mirrors. 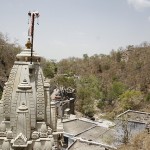 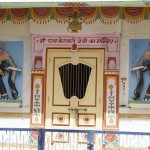 A hard fact about this growing township is that nearly 60% of the houses here are shut – it looks as if the whole Jain community is out on business. All the business-minded Jains have made huge successes in business and moved permanently to bigger cities, majorly Mumbai.

The lane going down from the main commercial centre narrows down into tiny by-lanes adorned with beautiful new and old houses on both sides. But, the lanes greet you with a distinctive eerie silence and that too in the middle of the day, since all doors are locked. These houses belong to the families who’ve moved out; families of the Jain businessmen who’re now settled in cities like Mumbai. The layers of dust on the sidesteps and the cobwebs dusting away on doors, empty lanes bright with color and the splendor of big and small houses all await the return of the inhabitants of the village. What’s ironical is that the place has seen much development and riches mainly due to the efforts of the enterprising Jain community; yet it is the Jains who’re absent from the village, visiting home once or twice a year, at the most. 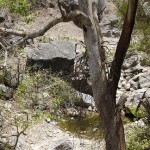 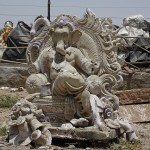 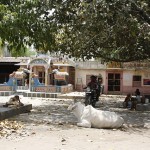 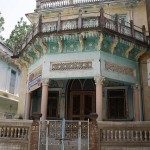 Another kilometer ahead of Sadri is a village congregation called Kacchi Basti, the hub of idol makers. The artisans from here are the major suppliers of Ganpati idols during the Ganpati festival every year in Mumbai.

Sadri is a mere 2 hours away from Udaipur and a mere 20 minutes from Ranakpur.