Must have Rajasthani dishes | #FoodiesDelight

India is known as the land of spices, and aptly so, as a plethora of exotic spices can be found in any Indian kitchen. Every region in the country has its own specialty culinary which involves unique ingredients. While in India you need to have the chutzpah to try out different varieties of food. No matter which part of the country you travel to you can be sure to taste the most delectable dishes you would taste anywhere in the world.

Rajasthan, primarily offers mouthwatering vegetarian cuisine. The local specialty dishes have remained unchanged for centuries. Compared to the other cuisines in India, Rajasthani food is high on the spice content but would nevertheless leave you salivating for more. It’s basically a foodie’s paradise!

Being a desert state, the water resources in the region are scarce. So only a few varieties of vegetables can be grown here. Initially, the local inhabitants created such dishes that would require minimal amount of water and would last for several days even in the hot weather. The trick was cooking dishes using a generous dollop of ghee, milk, buttermilk and yogurt. The staple crops of this region are the water-intensive jowar, bajra, and other dried lentils.

If you are a person with a sweet tooth, Rajasthan is the place for you to be. The unique thing about the food culture of Rajasthan is that unlike other regions around the world where sweets are eaten as desserts or after the meals, in this part of India sweet dishes are an integral part of the meal. The traditional Rajasthani Thali would surely include a delectable sweet dish. Some of the must try Rajasthani dishes are listed below! 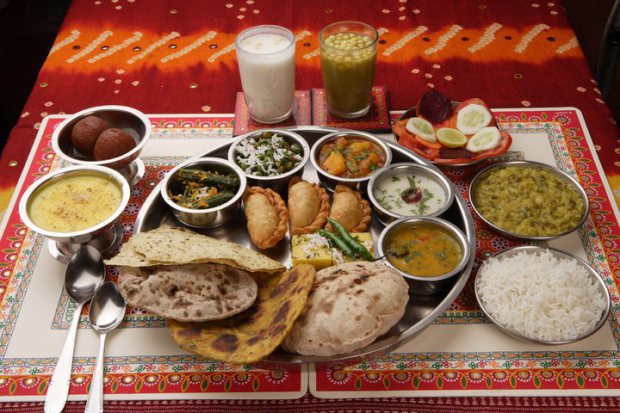 The Rajasthani thali in all its glory!

This is one of the most popular Rajasthani dishes. It is essentially made out of whole wheat dough. The dough is rolled into small balls which are roasted over the coal until the outer portion becomes hard. The dish is eaten with a helping of lentil soup or daal and is served with a dollop of ghee. Best enjoyed when hot!

This is another popular dish from Rajasthan. Pakodi, which is also commonly known as bhajiya is a delicious snack item that tastes similar to fritters. The batter is made of gram flour and the filling is made of a selection of vegetables marinated in aromatic spices.

This is a specialty sweet dish of Rajasthan. It is a round cake made from flour, milk, ghee and topped with dry fruits. This dish has a crunchy texture and it simply irresistible for sweet lovers.