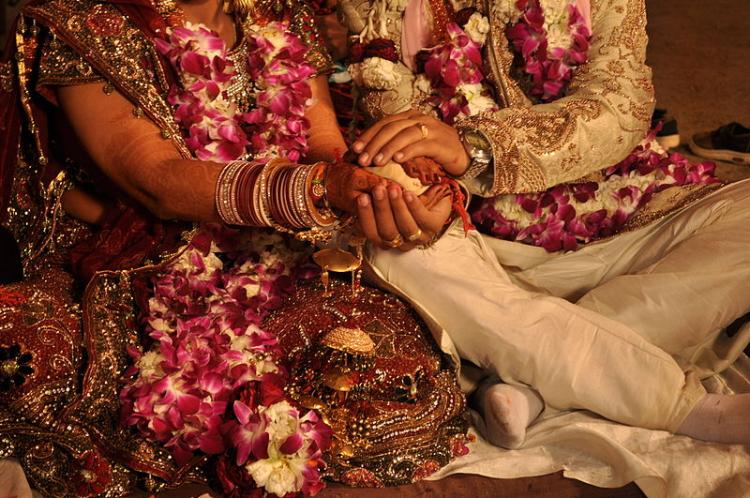 You must have all read about the extravagant wedding ceremony of steel tycoon Laxmi Mittal’s niece that hit the headlines across all the media channels worldwide. Pramod Mittal, the father apparently spent about 60 million Euros on the various ceremonies.  It is, therefore, no surprise that the term ‘Big Fat Indian Wedding’ is popular all over the world.

Weddings in India are not just about spending lavishly on but also about celebrating the traditions and customs of the region and religion to which the bride and the groom belong. Every region in India has its own unique tradition. The Rajasthani wedding, just like the Rajasthani culture, is known to be vibrant, colorful and full of unique rituals that define the culture of the Marwaris.

The bride and the groom have to follow a series of rituals before, during and after the wedding. Some of the popular wedding rituals of a Rajasthani wedding are :

The Engagement ceremony
Just like most other Indian weddings, the engagement ceremony (known as ‘sagai’) is a mandatory ritual in a Rajasthani wedding. In this ceremony both the groom and the bride exchange a ring that symbolizes their acceptance of each other as life partners. It is generally a small family affair and is attended by all the elders in the family who bless the soon to be married couple.

The engagement ceremony is held at the groom’s house, and attended only by the male relatives. The bride’s brother performs a ‘tilak’ ceremony, by applying it on the groom’s forehead. The groom may also receive sword, clothes, and sweets on the occasion.

The Pithi Dastoor ceremony
In this ceremony, the relatives of the bride/groom apply Haldi paste on the hands and feet of the to-be-wed couple, in their respective homes. As per tradition, after this ritual the groom and the bride are forbidden to step outside their home till they are married.

Kanyadaan
This custom is called ‘Kanyadaan’. This signifies that in marrying the couple, the father of the bride passes the responsibility of his daughter’s well being to the groom.

Granthi Bandhan
Granthi Bandhan stands for ‘tying the knot’ – a cloth knot tied around the groom’s waist has its other end tied to the bride’s chunni. This can be seen as a symbol of their union.

Phera Ceremony
In this ceremony the bride and the groom walk around the sacred fire seven times and take an oath of being with each other for their entire lifetime. It is the most important ritual in an Indian wedding.

The Satapadi ceremony
After the completion of the Phera ceremony around the fire, the groom and the bride take seven steps in the direction of the Sun. This ceremony signifies the couples’ constant companionship through situations good or bad. After this ceremony, they are declared man and wife.

The wedding ceremony is followed by a few more ‘Pooja’ ceremonies at both the bride and groom’s house. If you are attending a Rajasthani wedding, you will get to feast on an elaborate menu full of mouthwatering sweets and savory dishes.