Skip to content
Home » Rajasthan – The Destination for Weddings in India

Rajasthan, with its vibrant traditions and regal heritage, is emerging as the wedding hub for the elite across India and abroad. This state of chivalry and romance, with majestic forts and palaces, some of which have been converted into luxury hotels, makes for the perfect venue for glamorous weddings. Grand processions, folk dancers in traditional garb, turbaned men, elephants and camels are all elements of a wedding in Rajasthan that tend to knock the socks of people. Some of the most popular destinations in Rajasthan for regal wedding are: 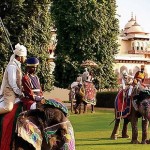 Jaipur: The capital city of Rajasthan counts as one of the most beautiful cities of India and has managed to retain its cultural heritage in the face of modernity. Jaipur offers a variety of palaces converted into hotels (for example, Ram Bagh Palace and Jai Mahal Palace) and other historical monuments that allow for the organization of a royal affair. It also has many beautiful mansions available for weddings which prove to be a less costly option. 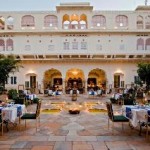 Samode: A small village nestled in the foothills of the Aravalis, Samode is a convenient 42 kilometres away from Jaipur and is famous only because of Samode Palace. The Samode Palace Hotel is one of the best heritage hotels in India, having won awards for best decor and service for many consecutive years. However, Samode Palace has only 42 rooms and therefore can host only small and exclusive weddings. 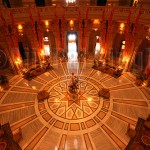 Jodhpur: The second largest city in the state of Rajasthan, Jodhpur is also famous for its magnificent forts and palaces. Umaid Bhawan Palace, the last great palace of India with the biggest private residence in the world, is now five star deluxe palace hotel and has three hundred and forty seven rooms. There are also many grand public spaces to host elaborate wedding events. Ajit Bhawan Palace on the other hand continues to serve as the residence of the royal family while welcoming guests. A much smaller hotel, it too is tastefully done and has lush lawns for gala events. 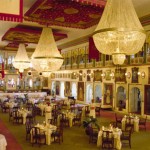 Udaipur: Romance is tangible in the air when you reach Udaipur. It has many grand palaces like Jagmandir Island Palace, Fateh Prakash Palace, Shiv Niwas Palace and City Palace which regularly play host to some of the most beautiful weddings in India. The Durbar Hall at Fateh Prakash Palace is one of the most majestic halls in India and has hosted many state banquets and formal durbars. There are cheaper options also available for those want to a bite of the beauty of this city without needing a red carpet. 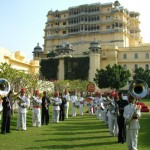 Devigarh Palace: This palace hotel situated in the village of Delwara commands one of the three main passes into the valley of Udaipur. Surrounded by lushly green fields and mountains on three sides, the Devigarh palace is an elegant romantic getaway in the desert land of Rajasthan. Wedding services at Devigarh are outstanding too. If need be, they take care of everything – including themes, decor, menu, gift wrapping and what not. This 23 suite and 6 Shikar tent hotel is the best in the wedding business.

One Reply to “Rajasthan – The Destination for Weddings in India”