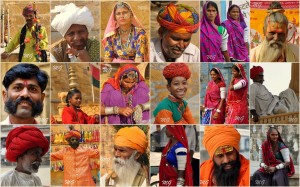 Rajasthan is diverse and colourful, and its people are divided into groups and sub-groups basis their role in society. These roles are passed on from generation to generation, forming a caste system that continues to define the identities of modern day citizens even today.

Gallant and chivalrous, the Rajputs were the ruling class and their legacy continues to live on today. Though they were warriors, the Rajputs were great patrons of arts and crafts. They rose to the elite class of the region and the reason for their downfall was inter-clan rivalries that often came in the way of their offering a joint opposition to invaders.

Brahmins – The Class of Priests

Unlike the rest of India where Brahmins were at the top of the social ladder, in Rajasthan they had a secondary position. The positioning of Rajasthan made it vulnerable to invasions and its people needed warriors more than intellectuals at the time. Yet, Brahmins held important positions in the royal courts.

Marwari and Jains – The Trader Class

Businessmen are integral to every economy. With business comes wealth and in Rajput ruled Rajasthan, sometimes Marwari merchants were richer than the rulers themselves! The Marwaris originated in the Shekhawati region and used to serve in the courts of princely states. Jains, the only other merchant community, also enjoyed tremendous influence in the courts. They also contributed splendid architecture in the form of superlative marble temples at Ranakpur, Mount Abu, Chittaurgarh, Jaisalmer, Jodhpur and Bikaner.

Jats And Bishnois – The Pastoral Class

Considering the hostile climate of Rajasthan, pastoral people involved in farming and livestock rearing were important. Jats were local heroes who sacrificed their lives for the protection of their village communities. Jats are a hardworking community who also live in Haryana and Punjab. Bishnois too are respected for their passion to conserve both plant and animal life. Today, they have become icons for conservationists.

Largely agriculturists now, the Tribal community mostly inhabit the barren lands of Rajasthan. However, they have always held important roles in society as caretakers of royal treasuries, appointers of heads of clans and there are many legends of their valour and chivalry in times of crisis. Some of these tribes are the Bhils, Sahariyas, Gerasiyas etc.

There are many nomadic tribes of Rajasthan that move around sharing their particular skill sets with settled communities. Gadoliya Lohars are skilled blacksmiths whose decorated carts are renowned. Banjaras are the nomadic caravan runners that travelled with oxen-laden caravans. Today, they lead a semi-nomadic life and have picked up other means of livelihood. Rabaris travel in the desert in pursuit of pastures for their flocks of sheep and camels. The Nayaks are the entertainers. The enchanting snake charmers like Kanjars, Sansas, Nats and the well-known Kalbeliyas whose unique dance (also known as Kalbeliya) has gained a lot of recognition.