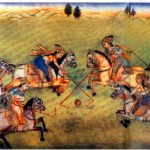 Polo – the very name conjures up visions of aristocracy, excellence, style and rare athletic prowess! It is a game that represents power, adventure, beauty, elegance, graceful teamwork, class and above all; traditio. Polo is fascinating and in modern times, it is considered a popular adventure sport.

The origins of the game of polo are obscure; being claimed by China, India, Iran and others. India is said to be the cradle of modern polo which perhaps is derived from Manipur where the game was known as ‘Pulu’. The oldest polo ground in the world is the Imphal Polo Ground. In 1862 the first polo club, Calcutta Polo Club, was established by two British soldiers. However, Polo did not become a passion until the British period when it became a marvelous peacetime pursuit. Rajputs too have always been keen equestrian and so their taking to polo in big way was only natural. Their association with polo dates back to the Mughal period.

Rajasthan is a formidable polo playing state where this sport remains largely confined to the elite social circuit. This super premium category sport still thrives in Rajasthan and has seen a quantum jump in its popularity as a lifestyle sport. Rajasthan polo circuit draws a lot of international glare. It has attracted attention from corporate houses for sponsorship. Going beyond the royalty and the Indian Army, many companies and firms have begun to patronize the sport. Polo facilities are on the rise and polo holidays in India too are in vogue, especially in Rajasthan.

While it is not possible to simply arrive and start playing polo; it is possible to make a special request to play while planning your trip to Rajasthan, especially if you are a group with polo-playing members. This is important because, in season, when the game is played (September-March), the polo teams are often out (in Delhi, Calcutta or Mumbai) on the circuit, or may even be playing overseas. Of course, there is also the chance of having visiting teams in Rajasthan coinciding with the time of your visit.

Watching the sport from a distance is almost as good as playing. It is thrilling to watch players on their horses skillfully follow the ball with sticks in their hand. The superb synchronization between man and his horse, the amazing speed, the brute power, with the backdrop of green arena makes for most exclusive and glorious sport of all.

Rajasthan hosts exciting Polo games in Jaipur. The people of Rajasthan have a special place in their hearts, for Polo. It is not uncommon to have a crowd of 20 thousand people watching the finals of a high goal tournament in Jaipur.