Once the home of the descendents of the illustrious Prithviraj Chauhan; the Neemrana Fort – Palace is now one of the oldest heritage resorts in India. Built in 1464, the Neemrana Fort – Palace was the third capital of the descendants of the illustrious Prithviraj Chauhan after he was vanquished from Delhi in battle by Muhammad Ghori. It is said that being true warriors, the proud Chauhans continued to assert themselves, even under the British rule, causing their properties to be given away to other kingdoms, the rulers of which entertained the viceroys. In 1947, Raja Rajinder Singh, unable to afford the upkeep of his ancient and palatial home, moved to Vijay Bagh whilst the facade of his fort palace crumbled and it took him forty years to find a buyer for the grand property.

Today, the Neemrana Fort – Palace is one of the oldest and most picturesque heritage hotels in the country. A mere 122 kilometres from Delhi on the Delhi – Jaipur highway, the fort – palace sits atop a hillock of dark and rare rocks and has the most resplendent views of sultry sunrises and sunsets as well as the surrounding hillocks and fields. Walking into the hotel, climbing up the winding stairs and passages, guests are transported to another time as, being surrounded by period furniture, antique works of art, eclectic decor elements and frescoed paintings. 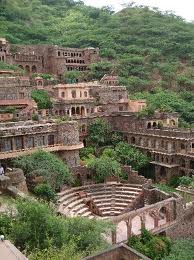 The hotel has 55 rooms/suits, rampart gardens, pool, health spa, and an amphitheatre, hanging gardens with a salon, a restaurant with a roof-top garden, conference rooms and many special suites.

While the ambiance of the fort palace is such that one wouldn’t want to leave, in case guests want to venture out, the nearby town of Kesroli attracts plenty tourist attention. According to historians, the fort at Kesroli can be traced to the Matsya Janapada from the times of the Mahabharata and is said to have been built the descendents of Lord Krishna. The hotel is known for its beautiful architecture with turrets, ramparts and arched verandas.

A beautiful destination, Neemrana is just a stone’s throw away from the national capital making it well connected and easily accessible. It makes for a perfect weekend getaway.