Janmashtami is a Hindu festival celebrated with much enthusiasm across India. It is the celebration of the birth of Lord Krishna, an avatar of Lord Vishnu. The festival is observed on the eight day  of the dark half of the Bhadrapad month as per the Hindu calendar and usually falls between mid-August and mid-September. In fact, Janm means birth and ashtami means eighth day. It is also known as Gokulashtami, Krishnashtami and Srijayanti. This year, it was celebrated on the 22nd of August, 2011.

Janmashtami is celebrated with much pomp and show in all parts of the country. In Mathura (Krishna’s birth place) and in Gokul and Vrindavan (where he spent his childhood), the celebrations last up to a week during which the Rasa Lila is performed. The Rasa Lila is the theatrical enactment of the Lord’s mischievous childhood and his flirtatious youth and love for Radha. The Dwarkadeesh temple in Gujarat and the Nathdwara temple in Rajasthan also celebrate the festival with much enthusiasm that are attended by scores of pilgrims. In the eastern states, the festival is celebrated by fasting through the day and doing a puja at midnight. In Maharashtra and Tamil Nadu, young men form huge human pyramids on the streets to reach and break the high hanging handi (pot) of butter to represent Lord Krishna’s fondness for butter. The puja on the day of Janmashtami involves bathing the Lord’s idol with Panchamrit which is a mix of water from the Holy Ganga river, milk, clarified butter, curd and honey and is considered to be extremely pure. After the bath, the idol is placed in a cradle which is then rocked amidst devotional songs dedicated to Krishna.

In celebration of this festival that celebrates youthfulness, joy and the arrival of the saviour on earth, Mana Hotels held a feast for the local community at their hotel site. 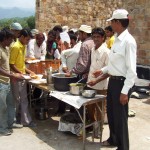 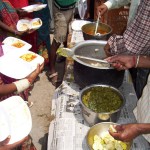 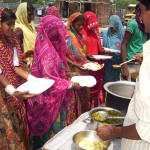 CEO of Mana Hotels, Mr Rohan Rajgarhia says, “We invited about 200 villagers in the vicinity of our resort to a lunch function on the occasion of Janamashtmi. Given the short notice, we got a sizeable turnout. This served as great encouragement for us to carry out such initiatives in the future as well. Blood donation drives, medical camps and other such activities will be held on various days throughout the year in the time to come.”