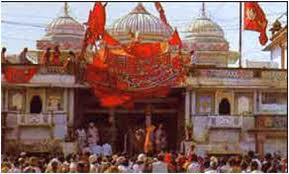 One of the most important festivals in Rajasthan, the Kaila Devi fair is celebrated by some of the most powerful Rajput clans like the Khinchis, Yadavs, and the princes of Karauli, who consider the goddess to be their guardian deity. Alongside, Kaila Devi is also worshipped ardently by the Meenas and other scheduled castes.

The festival is held at the Kaila Devi temple which stands atop Trikut Hill on the banks of River Kaisil in Karauli. Every year in the Chaitra Budi month of the Hindu calendar (March/April), devotees throng the temple with many offerings like cash, coconuts, kajal (kohl), Tikki (vermillion), sweets, bangles, etc. The whole area has a mystical and historical aura and the animal sacrifice during the fair gives it a rather primeval appeal.

The most moving part about the festival is the Kanal-Dandoti wherein staunch devotees lie prostrate and crawl their way up to the temple, covering about 15 to 20 kilometers in this manner. This ritual is mostly performed by the successors/followers of Goli Bhagat who was one of Kaila Devi’s most devout believers.

The frolic of the festivities comes with the native dance and song of groups of Meena tribesmen who create an electric ambiance with their gaiety and the spacious courtyard of the temple reverberates with beautiful music and thumping dances in reverence to the goddess.

As is seen across the state, a religious congregation often results in a commercial one and there are many merchants selling colourful bangles, handcrafts, and decorative items. The culture and passion of Rajasthan shine through during the Kaila Devi Fair.