Jodhpur is all about grand forts, folklore, valour and romance. Founded by Suryavanshi Rao Jodha, the city has been the erstwhile capital of Marwar and an important trade and commerce centre since it was on the trade route between Central Asia and. Even now, it continues to be a major hub of textiles and crafts trade. There is an unmistakable medieval flavour in the city which can be felt in the ambience that forms a part of the culture of the city.

Jodhpur is an ideal destination for tourists, especially for those who want to try the fiery and aromatic Rajasthani cuisine. The famous ‘kachori’ with piquant tamarind ‘chutney’ is the hot favourite. Then there are delicious ‘laddoos’ which are sure to tickle your taste buds.  Of course, the tall glasses of refreshing and cool ‘lassi’ are just what you need after the spicy Rajasthani food.

Mehrangarh: The indomitable Mehrangarh For 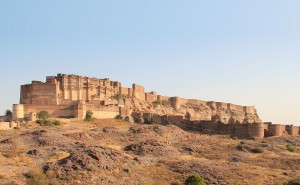 t was constructed by the invincible Rao Jodha and is one of the grandest forts of India. It stands majestically on a hill, offering a panoramic view of the surroundings to the visitors. The fort has elaborate latticed windows, intricately carved panels and gracefully curved porches which add tremendously to its grandeur. Every part of the fort has a distinctive appeal and narrates a glorious tale of history. Moti Mahal, Phool Mahal, Sheesh Mahal, Sileh Khana and Daulat Khana all add to the distinct ambience of the fort. The fort also houses the second largest cannon in Asia, whose recoil itself requires as area as large as a football field! For those for love artifacts, there is the museum shop that has some of the best handicrafts, books and literature including some eclectic products on display. 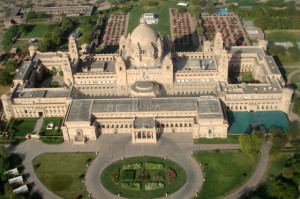 st defines Umaid Bhawan Palace. Built in the 20th century as a famine relief project to provide employment to people for 16 years, the palace is sheer resplendence and undoubtedly one of the most impressive sights in Jodhpur. The palace museum is a literal treasure chest of mementos displaying the royal history of Jodhpur and has artefacts ranging from clocks and tea sets to paintings and royal costumes. The palace has now been converted into a heritage hotel though the royal family still lives in a part of it.

Jaswant Thada: Towards the left of the Mehran 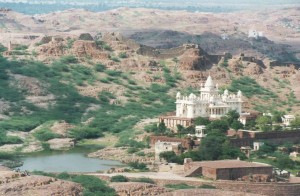 garh fort complex is the royal cenotaph made of white marble called ‘Jaswant Thada’. It was built to commemorate Maharaja Jaswant Singh. Some rare portraits of the former rulers of Jodhpur are also displayed here.

HOW TO REACH
By Air: There are regular flights to Jodhpur from New Delhi, Mumbai, Udaipur, Jaisalmer and Jaipur. The nearest airport is the Jaisalmer Airport which is managed by the Indian Air Force.
By Train: The railway connectivity of Jodhpur with the major cities of India is really good. The most preferred trains are Jodhpur-Jaipur Intercity Express, Jodhpur-Kota Express, and Jodhpur-Bikaner Passenger.
By Road: Smooth network of roads and luxury coaches link Jaisalmer to all the major cities of Rajasthan such as Bikaner, Jaipur and Jaisalmer. The main Bus Stand is right in the heart of the city.