A celebration of married bliss, Gangaur is celebrated in honour of Gauri or Parvati, the Hindu goddess of abundance. Parvati was the consort of Lord Shiva (also known as Gana) and is the epitome of virtue and fidelity in Hindu mythology. 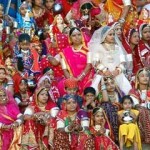 Gangaur is an eighteen-day festival celebrated throughout Rajasthan by both married as well as unmarried women. Starting from the day after the festival of Holi, Rajasthani women adorn themselves with mehendi and their best finery to pray to Gauri. From the seventh night after Holi, the unmarried girls walk around their villages with ghudlias or earthen lanterns on their heads. Along the way, they are showered with gifts of cash, sweets, and oils. Three days before the festival comes to a close, a procession of women carrying images of Gauri and Gana and singing songs about Gauri’s departure from her family is held. On the last day, these images and ghudlias are immersed in water and the women bid farewell to Gauri. 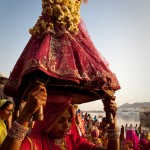 The belief is that unmarried women participating in this ritual will find a spouse of their choice and that the married women are ensuring wellbeing, safety, and happiness in their marriage. In fact, it’s a festival of such great significance that it is mandatory for a newly wedded bride to observe the festival for the full eighteen days in the first year of marriage. Often, that means fasting for eighteen days.

Interestingly, Gangaur is one of the few events in a Rajasthani culture that permits men and women to interact with each other freely, furthering their chances of finding a spouse of their choice. 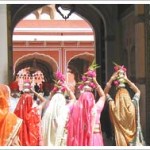 This spring festival is celebrated with great enthusiasm all over Rajasthan with elaborate celebrations in Bikaner, Jodhpur, Nathdwara, and Jaisalmer. In Jaipur, Gangaur is celebrated with much pomp and the procession with the image of Gauri starts at the Palace Gate known as Tripolia and moves through the city. Also, one must get their hands on a delectable sweet dish called ghewar, an essential part of Gangaur festivities.