While it is celebrated to mark the slaying of the evil Ravana and his brothers by Lord Rama and the beginning of the festive season in the country, it also marks the commencement of the winter harvest season in the subcontinent. 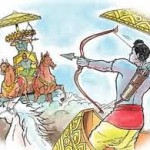 The high points of the festivities of Dushera, especially in northern India, are the effigies of the three villains (Ravana, Kumbhkarana and Meghnad) which are burnt at sunset in public spaces to symbolize the victory of good over evil. Usually, the effigies are filled with crackers and a child dressed as Rama is made to shoot arrows of fire at the effigies to light them. Crowds of thousands gather to see the ceremonial burning, which in itself is a sight worth seeing.

The Dushera celebrations in Kota, Rajasthan are grand. The effigies set up here are more than 75 feet tall and villagers gather around dressed in multicoloured clothes to watch the burning and to offer prayers to Lord Rama. Prominent artists from across the country are invited to participate in cultural programmes that enthral the audiences, which often include tourists. The Dushera celebrations in Kota are marked by a glittering procession that attracts thousands from surrounding villages and there are many enactments from the Ramayana that depict the events that lead up to the slaying of Ravana. Dushera is also a great time for traders in Kota who display their attractive wares to both rural and urban buyers who flock to the city and the small effigies of Lord Rama, Sita and Lakshman are very common works of sculpture.

If you want to be a part of the largest Dushera celebration in the country, Kota is the place to be!