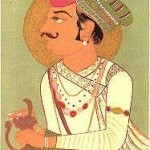 Once upon a time, there was a Rajput prince called Rao Bika. He was the second son of Rao Jodha, the founder of Jodhpur and he would never inherit his father’s throne. Thus he left Jodhpur to form his own state – in the barren lands of Jangladesh which happened to be on the trade link between Central Asia and Gujarat’s coastline. The city he built and eventually, the surrounding state came to borrow his name and be known as Bikaner. Rao Bika’s fort, built circa 1478, now lies in ruins. 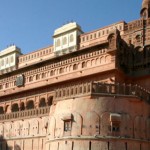 Being on the trade route, Bikaner’s potential for prosperity always caught unfavourable attention and it was engaged in constant battle until a hundred years later, during the reign of Mughal emperor Akbar, when Bikaner’s 6th ruler, Rai Singh, accepted Mughal suzerainty was inducted as a general in the Mughal army. The riches he received from the Mughals were wisely invested in his state and thus he built the famous Junagarh Fort.

Junagarh is one of the few forts in Rajasthan which was not built atop a hill. It was built around Rao Bika’s Fort, remnants of which can still be seen within. The fort covers 5.28 hectares of land, encompasses many Hindu and Jain temples, palaces, and pavilions, and has seven grand gates. The ornamentation of Junagarh Fort is outstanding with stone carvings in red and golden sandstone and paintings in traditional Rajasthani styles. Architecturally, the Junagarh Fort is a melting pot of many influences. The earliest structures are typical of Rajput architecture but along the way, Gujarati, Mughal, and British influences are clearly visible. 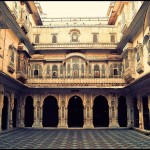 Junagarh’s palaces have many rooms as each king built his own living quarter, unwilling to live where his predecessors did. Phool Mahal is the oldest palace built for Rai Singh. Karan Mahal Palace was built by Karan Singh circa 1680 to mark his victory over Mughal Emperor Aurangzeb. The most exquisite palace in Junagarh, has gorgeous gardens, stained glass windows, intricately carved balconies, and wooden columns. Succeeding rulers Anup Singh and Surat Singh also added much to its grandeur with inlaid coloured glass, intricate mirror patters, and red and gold paint. Anup Singh also built the elaborate Anup Mahal with wooden ceilings with inlaid mirrors, Italian tiles, lattice windows, and balconies; which functioned as the Diwan-e-Aam and the administrative headquarters of the state. 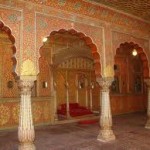 The Badal Mahal which is an extension of Anup Mahal has beautiful art including paintings of Shekhawati chiefs, images of people standing on nails, woods, and swords – a symbolic test of endurance – as well as frescos of Lord Krishna and his Radha. Chandra Mahal has without a doubt the most luxurious rooms in the palace with gold-plated deities and paintings inlaid with precious stones. Interestingly, the mirrors in the royal bedroom were placed strategically to allow the king to spot intruders entering his room. Ganga Mahal built by Ganga Singh is a large durbar hall that is currently used as a museum which even includes a World War I airplane. 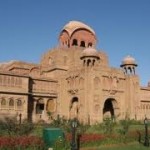 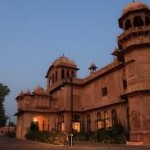 Maharaja Ganga Singh (1889 to 1925) was quite the prolific builder and he built the grand Laxmi Niwas Palace as his residence and Lalgarh Palace in memory of his late father Maharaja Lall Singh. Both were designed by British architect Sir Swinton Jacob and are amongst the top heritage hotels in Bikaner today.

As for the temples, Moolnayakji, constructed in 1486 was the first Vaishnav temple built in Bikaner. It remains till today one of the most important temples of the Vaishnav sect. The Laxmi Nath temple is also one of the oldest and most revered temples in Bikaner. The Bhandasar Jain Temple is one of the 27 beautiful Jain temples that spot the landscape of Bikaner and is dedicated to the 5th Tirthankar, Lord Sumatinath. It is said that the foundation of this temple was filled with pure ghee and dry coconuts at the time of construction. However, the temple is most famous for its wall paintings and usta art.

Bikaner also has its share of fairs and festivals. The annual Bikaner Camel Festival, being the biggest crowd puller, takes place in January and involves some spectacular displays and performances by the “ships of the desert”. The festival includes camel races, dances, and rides. The festival is also famous for many sweets made from camel milk. Apart from the camels, Rajasthani folk art and culture are also displayed with much pomp as folk performers from all over the state showcase their talents.

Bikaner is an ancient city with an intriguing history that unfolds beautifully as you dig deeper. It is truly a thriving oasis of culture, history, and grandeur within the Thar Desert.