The ancient city of Mewat, now known as Alwar, has played a significant role in the history of North India. The significance of this small Rajput state was immense can largely be attributed to its location as it lies approximately 160 kilometres from Delhi, on the way to Jaipur. In keeping with the Rajput ideals of chivalry and valour, the rulers of Mewat were fiercely proud and unwilling to accept any foreign assistance or interference. Despite the small size of their state, they did not hesitate to stand up in arms against foreign invasions and ventured to raid Delhi. However, the forces of Sultan Balban (1267 AD to 1287AD) were able to defeat them, bringing the entire area under a Muslim ruler. It was only in 1775 AD when Maharana Pratap Singh of the Jaipur clan was able to win the city back, did Alwar come under Rajput rule again.

The relics of the adventures of the ancients of this city are still visible and worth making an effort in Alwar:

The fort of Alwar is massive. It stretches over 5 kilometres from North to South and 1.6 kilometres from East to West and stands an impressive 304 metres above the city. This beautiful fort was constructed even before the rise of the Mughal Empire and provides a beautiful backdrop to the city of Alwar even today. It has 15 large and 51 small towers, 446 openings for musketry, 8 encompassing towers along with several gates and many temples. Legend has it that Babur had spent a night in the Alwar Fort and stolen many hidden treasures from here to gift to his son, Humayun. It is also said that Akbar’s son Jehangir stayed here for some time during his exile. In fact, the palace where he stayed is called Salim Mahal.

The City Palace was built in the 18th Century a 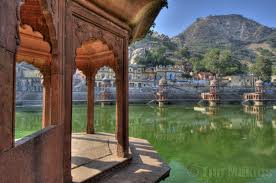 nd is a beautiful blend of Rajput and Mughal architecture. While the ground floor of the palace is now used as government offices and district courts, the upper apartments are reserved for the government museum; which houses the finest collection of Mughal and Rajput paintings dating back to the 18th and 19th century, rare and ancient manuscripts in Persian, Arabic, Urdu and Sanskrit, a copy of the great epic Mahabharata painted by artists from the Alwar school, along with a rich collection of Indian armoury. Behind the city palace is an artificial lake built in 1815 AD my Maharaja Vinay Singh, whose banks are dotted by temples. The marvellous and unique Rajput chhatri with the Bengali roof and arches (known as the Moosi Maharani ki Chattri) is also located in this area.

There are many worthwhile excursions to be made from Alwar. For example, The Vijai Mandir Palace (10km) is a beautiful 20th-century palace built on a picturesque lake. The Sita Ram temple in the palace attracts a large number of devotees, especially on the Ramnavami. The Sillserh Lake and Palace Hotel (13km) is an idyllic picnic spot overlooking an enchanting landscape of wooded hills and a beautiful lake with many chhatris on its banks. Jai Samand Lake (6kms) is a beautiful artificial lake constructed by Maharaja Jai Singh in 1910 AD and yet another idyllic picnic spot, especially in the monsoons. Sariska (37kms) is the thickly wooded Tiger Reserve in the picturesque valley of the Aravallis. While the Tiger population at the reserve is pitiful, it is noted for its flourishing population of Nilgai, Sambhar, Cheetal, Four horned Antelope and wild boar.