Ajmer is an ancient 7th Century city with an extremely complicated political history. Since its foundation, it has been under the rule of the Chauhan family with Dushyant Chauhan as its founder and his progeny, the illustrious Prithviraj Chauhan as the rulers, been annexed by the Muhammad of Ghor, the founder of the Delhi Sultanate, been a point of contention between the Mewari and Marwari Rajputana kingdoms and was ruled by both at different points of times, as well as been ruled over by the Mughals, the Marathas and finally, the British Raj.

Geographically, Ajmer is beautifully located and is an oasis surrounded by Green mountains of the Aravallis. Culturally, it is extremely significant as a religious centre for both Hindu and Muslim pilgrims who throng the city in hoards. 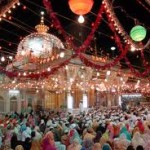 The Dargah Sharif of Khwaja Muinnudin Chishti consists of several white marble buildings arranged around two courtyards and has a massive gateway donated by the Nizam of Hyderabad, a mosque donated by emperor Shah Jahan, the Akbari Mosque and the domed tomb of the saint. The Dargah has been popular since the days of emperor Akbar who used to visit Ajmer with his queen by foot on pilgrimage from Agra every year in observance of a vow he made while praying for his son. On an average, approximately 1.25 lac pilgrims visit the Dargah on a daily basis. The Urs or the commemorative celebration in the solemn memory of Khwaja Muinnudin Chisti is the largest Muslim fair held in India. 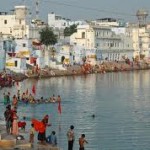 Pushkar, a mere 11 kilometres from Ajmer is considered to be the abode of Lord Brahma, the God of all Gods in Hinduism. The 14th century Brahma temple on the banks of the Pushkar Lake is one of the very few dedicated to the creator-god. The temple is made mostly of marble and stone slabs and has a distinct red pinnacle (shikhara) and a hamsa bird motif. The temple sanctum holds the central images of Brahma and his second consort Gayatri. The priests in this temple are from the Gurjar community as it is believed the Gayatri was a Gurjar. The Pushkar Lake on the other hand is considered extremely sacred and a dip in it is supposed to wash away the pilgrim’s sins. In fact, there are 52 bathing ghats surrounding the lake to enable believers to do exactly that. The Camel Festival of Pushkar held on the full moon night of the Kartik month as per the Hindu calendar (November – December) is the largest camel fair in the world and the cultural activities conducted alongside attract foreign tourists from across the world.

Adhai Din Ka Jhonpda is a 12th Century Hindu temple dedicated to Lord Vishnu which was converted into a Mosque by Qutubuddin Aybak some 40 years after its construction. It is situated on the slope of the same hill, the Taragarh hill, which houses the Dargah Sharif at its foothill. It is known extensively for its double-depth calligraphy inscriptions in Naskh and Kufic scripts. Apart from the part used actively as a mosque, the ancient temple is in ruins but relics of beautiful Hindu art can still be seen. The temple has 40 columns supporting the roof but no two are alike and are exceptionally decorated. 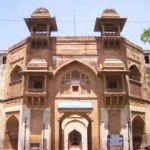 Magazine, once the residence of Emperor Akbar’s son, Prince Salim, is the Ajmer Museum and houses various Mughal and Rajput armours and sculptures. The house is also historically significant as it was from here that Salim as Emperor Jahangir announced the commencement of trade with the British empire which can be pinpointed as the first in a series of events that eventually led to the colonization of India by the British. 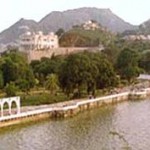 Ana Sagar Lake was constructed by Maharaja Annaji, the grandfather of the great Maharaja Prithviraj Chauhan. This gorgeous artificial lake is accompanied by Daulat Bagh, a beautiful Mughal garden laid out by Emperor Jahangir. Later, Emperor Shah Jahan added five pavilions between the garden and the lake. 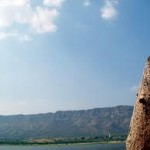 Lake Foy Sagar, named after an English engineer named Foy is situated on the outskirts of Ajmer and was originally built as a part of a British led famine relief project. Today, it is another picturesque feather in Ajmer’s hat. In appearance, Lake Foy Sagar is flat and has a great few of the surrounding Aravalli Mountains. The evening flight of birds near the lake is a great attraction for bird watching enthusiasts.