The eight principals of Mahaveer’s philosophy had one common objective – to improve quality of life. He preached that every soul is in bondage to karmic atoms accumulated by good and bad deeds since eternity and that in a state of karmic delusion; we tend to seek temporary and illusionary pleasure in material possessions which are the root cause for many vices. In order to free ourselves, he explained the necessity of right faith, right knowledge and right conduct. To achieve the same, he took five vows – nonviolence, truthfulness, non-stealing, chastity and detachment.

A celebration of the memory of this great saint, Jainism’s 24th tirthankar, the Shri Mahaveerji fair is held in Chandangaon every year. 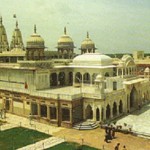 The fair is held from Chaitra Shukla Ekadasi to Baisakh Krishna Dwitya (generally in March or April; 12th to 18th April this year) at the Mahaveer Temple located in an enclosure known as katala. The temple houses an image of Mahaveer which is believed to have been dug out by a leather worker from a hillock nearby called Devta – Ka – Tila. At the front of the temple, there is a grand marble pillar known as Manna Stamba (Tower of Glory).

During the festival, a large number of devotees gather at the temple to watch this image of Mahaveer being washed, worshipped and offered many treats. Some of the offerings are rice, white and yellow flowers, sandalwood, camphor, saffron, mishri (crystallized sugar) and dry fruits. The festival also features a feisty procession or rath yatra on the last day of the fair. On this day, the deity is taken to the bank of river Gambhiri with a lot of pomp and show for a Kalash Abhishek in a golden chariot pulled by bullocks. All of this is accompanied by an almost fervent singing of religious hymns or bhajjans and slogans hailing the saint. 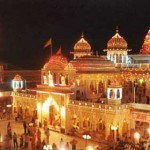 At the end, the procession returns with similar enthusiasm to the temple and the image is restored to its original place. In the evening, the temple is beautifully illuminated.

Apart from the religious devotee, the fair is one that everyone should witness at least once in their lives. It can be said easily that the faith is almost palpable and the passion is unbridled. The sheer volume of visitors to this small town in Rajasthan during the Shri Mahaveerji Fair is such that propels the local businessmen to participate as well. Therefore, cloth, food items, toys and Rajasthani handicrafts are found here in plenty.

The site for the fair, Chandangaon is 18 kilometres from Hindaun City which is approximately 164 kilometres East of Jaipur. The Shri Mahaveerji Station, a mere 6.5 kilometres away from the site, is on the Western Railway, Delhi – Mumbai line.