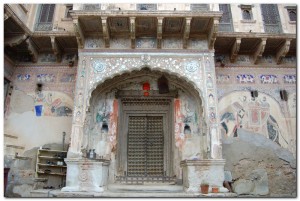 Once upon a time, a man named Mandu Jat dug a well and founded a dhani or hamlet. It was originally named Mandu ki Dhani and was eventually renamed Mandawa. Such were the beginnings of this village in Shekhawati, Rajasthan.

Thakur Nawal Singh on the other hand founded the Mandawa Fort in the 18th century. It is the highlight of the village with a prominently painted arched gateway depicting Lord Krishna and his cows. The fort’s interiors have gorgeous frescoes and mirror work depictions of Lord Krishna. Its Durbar Hall is most popular amongst tourists.

If you’re in Mandawa for 2 days, you can visit surrounding towns in quick circuits. These can include Fatehpur, Ramgargh, and Nawalgarh. 30 km away from here is Fatehpur, also known for its havelis.

Another must-see attraction is Castle Mandawa, which is now a luxury hotel but still features original historical artwork. Mandawa town is called an “open art gallery” because you’ll find stunning mansions (Havelis) with incredibly detailed paintings on their walls.

Their most prized attractions however are their beautifully ornamented Havelis that dot the town:

Goenka Double Haveli: features a façade of elephants and horses. The haveli’s outer walls feature traditional patterns and paintings of Rajasthani women and religious motifs, as well as European life.

The haveli features paintings of trains, cars, George V, and Venice that date back to the 1930s. They were made by Balu Ram, a well known artist. This haveli is interesting because it features a blend of the East and West. You’ll find paintings like Lord Krishna in an English courtyard, and a young Jawaharlal Nehru on horseback, holding India’s national flag. The Thakurji temple located here (opposite the Murmuria Haveli) feature Indian soldiers being shot from the mouths of cannons, depicting the Mutiny of 1857.

Mandawa is also home to many beautiful temples, but a must-see temple is Raghunath temple for its colourful paintings. The Lord Rama temple is located in Mandawa’s main market.

It is easy to reach Mandawa – there is connectivity by road, as well as by rail (via the Jhunjhunu railway station). The Jaipur airport is the nearest one from Mandawa.

It is advisable to hire a guide for a detailed tour of the havelis. The guides are pretty affordable, especially if you are booking one as a group.