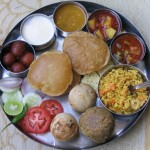 Food traditions within India differ from place to place basis the drastic geographical variations available here. In Rajasthan, the scarcity of water and the presence of a rich cattle population have resulted into a heavy dependence on milk, curd, buttermilk and clarified butter or ghee in preparations. Similarly, in the absence of fertile land for the cultivation of green, leafy vegetables, there is a pronounced use of lentils, pulses, legumes and locally grown beans. Interestingly, since there was also often an acute shortage of fuel to ensure freshly cooked food at all meals, many elements of the Rajasthani cuisine can be preserved for multiple days.

Food is a central theme in Rajasthani culture and the kitchen, an integral part of every household. In fact, like most otherwise mundane acts, it too was elevated to the position of an art. There exist legendary stories about the royal feasts where more than a hundred dishes were served during one meal in utensils of silver and gold. There would often also be a contest to serve guests extravagant foods made of unusual recipes. In the households of the common man, the kitchen was the woman’s domain and she took pride in running it successfully.

In fact, across India, food traditions have evolved over time as people came into contact with foreign influences, especially like the Mughal and European traditions. In the case of Rajasthani households, such influences have been minimal. 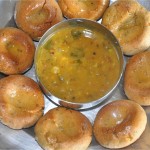 The most famous amongst all Rajasthani dishes is the lip-smacking combination of Dal -Baati – Churma. While the dal or lentil soup is a combination of five varieties of lentils cooked slowly over coals and flavoured with generous helpings of ghee, dry red chillies and other spices, the baati are balls made of wheat cooked thrice – steamed, baked and then fried. The baati is sometimes stuffed with peas and other lentils. The churma is a popular sweet dish of Rajasthan made of coarsely powdered cereals mixed with sugar. Generally, churma is cooked to either mark a special occasion or to honour a special guest. Dal – Baati – Churma is an absolute must-have. 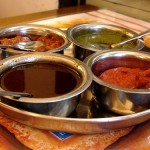 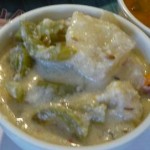 While most Rajasthani families are strictly vegetarian, thanks to economical as well religious dictates, the Rajput clan however has always been big on hunting and their chefs would delicately cook the day’s victory and incorporate it into the night’s menu. As a result, the most commonly eaten meats in Rajasthan are hare or rabbit, wild boar, deer and game birds. Interestingly, the women of Rajput households never involve themselves in the cooking of the meats because they consider it impure. Non vegetarian dishes here are classified into laal maas (red meat) or safed maas (white meat). Red meat is cooked in rich gravies of tomatoes and heavy spices while white meat is stuffed with dry fruits and slow cooked in gravy of cashew, cream, coconut and almonds, laced with light spices. Kebabs are the only visible in foreign (Mughal) inclusion into the Rajasthani menu. 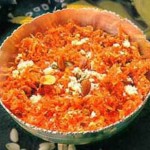 The sweet dishes from Rajasthan are to die for. Native Rajasthanis have a unique tradition of coupling sweet dishes with the main course (roti/puri) instead of vegetables or meats. Halwa-Puri for example is one such famous combination. Rajasthani sweet dishes are also often made from pulses, legumes and dairy products, have a heavy dose of clarified butter and are often cooked in an extremely sweet liquid called chashni, which can be loosely translated as caramel. Halwas, laddus (sweet balls) and chakkis (a fudge like desert made from lentils and dry fruits) are a must on all festive occasions. Kheer, (a milk based sweet dish with rice and dry fruits), ghevar (a Jaipur speciality) and malpua (a sweet roti from Pushkar) are some of the must-try’s amongst Rajasthani cuisine.

With all this and a lot more to offer, the treats available in this culture are tempting enough to justify a visit based solely on food!