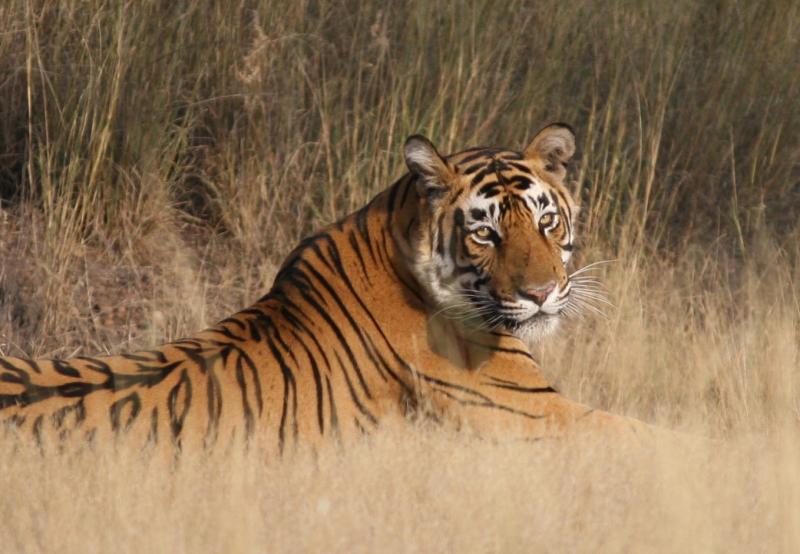 To get all you nature lovers pumped about the wildlife reserves in India lets begin with the hinterland. Madhya Pradesh is fondly known as the “Heart of India” in its tourism campaigns because it is geographically located in the middle. With more than 30% forest lands of the entire country, it hosts 10 National Parks, 6 Tiger Reserves and 25 Wildlife Sanctuaries, earning it the label of “The Tiger State.”

Madhya Pradesh’s pride is Kanha for being the largest national park here and for its diverse landscapes. It is one of the oldest sanctuaries in India that was declared a Tiger Reserve in 1973. Its landscape of the lush Sal and Bamboo trees is what Rudyard Kiping described in his epic tale, “The Jungle Book.” Wide ranging flora of about 1000 species is found here. This was originally the home of the Baiga tribe, a sect of semi-Bedouins that depended on the forest for survival, later relocated to maintain this as an organic Tiger Reserve.

Kanha’s highest achievement is the successful preservation of the Barasingha or the Hard Ground Swamp Deer, with only 66 left in 1970 to about 400 thriving now.

Well managed and with proficient staff available, this tops our list as one of the most visited national parks in India. Its popularity led to the flourishing of many famous resorts in Madhya Pradesh offering comfortable accommodation here. You can even opt for the bush camps set up in safer locales of the jungle for a more thrilling experience. They organise morning and evening Jeep Safaris with trained naturalists.

Visit between October to May end for comfortable weather. Closest to the Jabalpur Airport by a distance of 160kms.

Located in the Umaria District, this was declared a National Reserve in 1993. With the highest density of tiger population in India, there is a popular saying about this place, “One could be lucky to see a Tiger anywhere in India but unlucky if they haven’t seen a Tiger in Bandhavgarh.”

The sure sight of this beast sauntering the jungle will leave you with cold shivers. Though the Jawai Leopard Trail in the Ranakpur belt of Rajasthan is quite trending as one of the most famous safaris in India, we suggest you take some time out to visit this Bandhavgarh Tiger Reserve for an up close view of the famed Royal Bengal Tiger and the Indian Leopard.

In close proximity to the Bandhavgarh Fort, there are also several man made caves here with inscriptions and paintings on the rocks. Mythologically, this place is mentioned in the Ramayana. Simplified as Bandhav(brother) Garh(fort), it is said Lord Ram gave these forest lands to his brother, Lakshmana so that he could watch over Lanka.

Visit the Jwalamukhi Temple and Badi Gufa, while you stay at some of the best jungle resorts in Madhya Pradesh. Of course the Resorts in Rajasthan are more commercially adept and experienced due to the visitor rush there but it is highly recommended that you visit these hidden gems of India’s wildlife scene.

This one is an offbeat location, a Tiger Reserve that not many travellers would have visited. Named after the Pench river that flows here and divides the reserve land. This has been known as the land from where “Mowgli” and other characters, Sher Khan, Akela, Baloo and Bagheera originated in Kiplings, “The Jungle Book.” Though a small part of this reserve is in Maharashtra, its exciting fauna resides on the Madhya Pradesh side.

The legendary Collarwali Baghin or the T15 resides here, famous for not just her tracking collar, but also because she is a ‘supermama tigress’ who gave birth to a total of 7 litters and 26 cubs here.

You can enjoy activities like the Jeep Safari, Elephant Safari, Bird Watching here, with varying wildlife packages available and accepting advanced bookings online. When you visit you will have the opportunity to watch, live from a safari jeep, how the herbivores make warning sounds when a carnivore approaches nearby. The experienced tour guides will patiently wait till they make you witness some thrilling wildlife sightings.

November to February are the best months to visit. There are plenty of properties here to stay near the Reserve, including Treehouses, Jungle Camps and Hotel-Resorts.

Welcome to nature’s own paradise, Pachmarhi. With green glades, lush meadows, waterfalls, natural pools, plateaus and deep gorges, it is famous as the “Queen of Satpura Ranges.” It is a part of the Satpura Biosphere Reserve, and added by UNESCO in its list of Biosphere Reserves in the year 2009. This quaint hill station serves as an extension of the Satpura Tiger Reserve being only 8.5km away.

Enchanting is the Mahuas sweet fragrance that hangs in the air, this native tree growing everywhere. With mild climate throughout the year, this hillside is host to many medicinal value herbs, ferns, trees and algae grown here.

Its name means five(Pach) caves(Marhi), legend has it that these caves were built by the Pandavas in their 13th year of exile for their survival. In the 19th century, this immaculate beauty was stumbled upon by Captain James Forsyth in 1857, while he was on his way to join forces that fought Rani Lakshmi Bai.

India with its diversity is home to some of the most popular and offbeat National Parks. We have curated a few that should make your bucket list!

Located in “God’s Own Country” this park is nestled in the serene Kannan Devan Hills of the Idukki and Ernakulam districts, near Munnar. The beauty that this place resonates with is unmatched and this is why till today it remains blemish free and intact from the charms of the tourist footfall that Kerala experiences.

Witness lush green tea plantations as far as the eyes can see, clouds hanging low sending showers every few hours and mountains full of diverse flora and fauna. The highest peak in India (south of the Himalayas), Anamudi, is also found here. You can even experience the wonderful Lakkam Falls here.

These Shola Forests of the Western Ghats are the home to the largest surviving numbers of the Nilgiri Tahr, which was once an endangered animal.

You can visit Eravikulam National Park while you stay in the scenic hills of Munnar, the distance being only 7.5km away. Visit this place for breath-taking views of the Nilgiri Mountains. You can take the Bus Safari and enjoy a Nature Walk around the hill to get up close and personal with the enchanting flora.

Leopard Safaris in Rajasthan have become quite the rage, due to the unique Jawai Leopard living close to human settlements and dwelling on granite terrain. But here the Leopard resides on the trees, and does not easily venture out in the open. For an eerie experience of witnessing leopards living closely to human settlements we suggest you book the Jawai Safari in Rajasthan.

Situated in Uttrakhand, this picturesque park can be found in the higher planes of the Garhwal Himalayas. The capital, Dehradun is about 190kms away from this mountain valley. Come here for the valley of wild flowers, “Har-ki-Doon”, the endangered Snow Leopard and Bearded Vulture. Eco-tourism is slow here thus it remains an offbeat location that sees few visitors in a year.

Central to the launching of the Snow Leopard Project by the Government of India, the park’s efforts for this animal’s conservation have led to positive results.

Visit these pristine mountain sides for sublime views and enchanting nature walks; an experience of a lifetime. Comfortable and humble accommodations in the form of chalets, cottages and hostels are available in Dharkari, a sleepy hamlet,16kms away. Mostly backpackers frequent this remote forestland for the fresh mountain air and serene ambience.

As one of India’s earliest and reputed National Parks, it is with high honours we place it on this list. It is part of the larger Corbett Tiger Reserve and is famed as one of the hottest tourist destinations in India, all year around. 110 tree varieties, 50 species of mammals, 580 bird species and 25 types of reptile species live here.

Dense deciduous forests, hills, grasslands, creeks, marshes and a lake cover the 520km2 area of this park located near the small town of Ramnagar.

You will have plenty of options to stay here. If you are a wildlife enthusiast opt for the jungle lodge experience that allows you to stay within the Park at night. Amid a plethora of hotels and resorts in Uttarakhand to choose from, there is always something for everyone.

Unlike the Wildlife Reserves in Rajasthan and Madhya Pradesh where the Leopards and Tigers can be easily located, in Corbett it is hard to spot these felines wandering around.

Tigers are abundant here but they cannot be easily spotted due to the excess of flora that allows them to easily camouflage. Here, the cat has been deadly and known to attack even the bigger mammals like elephants, buffaloes and other domestic animals when there is a shortage of prey.

Nature Treks, Jeep Safaris and Elephant Safaris are available in different zones of the park. The lake-side hill station of Nainital is only 140kms from here.

Finally, a park that will do justice to the king of the jungle! The grand and world famous Sasan Gir National Park in Gujarat, famous for the Asiatic Lions. Once upon a time this park was a royal hunting ground of the esteemed Nawab of Junagadh. Now it is one of the only places in Asia to spot the majestic Lions roaming freely in the wilderness.

This is a dry and deciduous forest land, it is the perfect ecosystem for the Lions to thrive here. In 2015 there were 523 Lions and 300 Leopards recorded here. The “Lion King” is the alpha predator among other species; notably the Leopard, Jungle Cat, Sambar Deer, Chausingha Deer, Golden Jackal, Indian Gray Mongoose, Honey Badger, Chital, Nilgai, Chinkara, Blackbucks, Porcupine, Hare, Monitor Lizard, Tortoise, Mugger Crocodiles, Wild Boar, Striped Hyena, Indian Fox, King Cobra, the Russell’s Viper and the Krait. There is plenty of aviatory fauna too, with about 6 types of endangered Vultures recorded here. Kamleshwar, a reservoir here, also known as the “Lifeline of Gir”, is the best place to spot the Marsh Crocodiles.

But a few eons ago, a lengthy drought from 1899-1901 reduced the Lion numbers to only 100 and as a means of survival they would attack domestic livestock of nearby villages. Efforts in conservation all throughout the 20th century led to these numbers increasing rapidly. Today, the Lions rarely attack people and their livestock.

The Sasan Gir Park is always closed from June to October, thus it is best to plan post-November for pleasant weather.

Upon searching online you will find advance bookings available for Gir Forest Safaris, Gir Tour Packages and Gir Hotel Bookings. Exceptionally systematic and efficient, the tourism services offered here ensure your experience of the Gir Forest in Gujarat is a memorable one. Open jeep safaris are available in the day time, leaving you spellbound in awe when you chance upon an entire pride.

Junagadh is the nearest railway station here being 76kms away, but you can even reach here after visiting the famous Somnath Temple, that is 50kms from here. Plan your trip wisely, as there are many archaeological sites of India to see nearby. The Diu Airport is about 65kms from here, so we suggest you not to miss out visiting the charming coastal terrains of Daman and Diu whenever you plan a trip to Gir.