Bandhavgarh, the original land of white tiger, is a quaint and densely forested area in Madhya Pradesh. The place, often referred to as the “Country of Tigers” is one of the most popular tourist destinations in the country. Each year a large number of tourists from around the world visit the place to see the tigers in their natural environment.

This forest is home to a great variety of exotic flora and fauna including the barking deer, Indian bison or the great gaur and the sambars. Touring to Madhya Pradesh would be incomplete without visiting Bandhavgarh.

Here are some of the tourist hotspots of Bandhavgarh:

This park is the pride of the region. People from all over the world come to Bandhavgarh only to see the park. It is home to many endangered species like the Indian Bison, langurs, chital, jackal, chinkara and the most popular animal of the region, the tigers. The National park spreads over 105 sq. km area and has the highest density of tigers in the world. Apart from the wild animals, tourists come here to watch a large variety of exotic bird species. Some of the popular species of birds found here are the steppe eagles, gray Malabar hornbills, green pigeons, browned fantails, and green bee eaters. 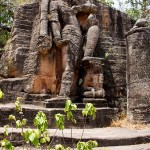 The fort located on top of the Bandhavgarh hill amidst the national park is one of the oldest forts in India. The fort has its mention in the ancient Indian books like ‘Narad Panch Ratra’ and the ‘Shiva Purana.’ Surrounded by various smaller hills that are separated by the sloping valleys, this fort is home to some endangered species of vultures. Legend has it that the Bandhavgarh fort was built by Lord Rama during his course of return from Lanka after defeating the demon Ravana. Insides the fort, there are statues of Lord Vishnu that date back to 10th century AD.

If you love adventure, you would surely be thrilled by the Elephant safari. Taking a ride across the National park is a great way to explore the various tourist spots around the area and is also a great platform to view more than 250 species of birds that are found in the region.

This hill with an elevation of 807 m above sea level is nestled in the centre of the National Park. The Bandhavgarh Fort lies atop the hill and it was the seat of the different rulers of the Rewa State in 1617 AD. The hill is surrounded by sloping valleys from all around and at the end of the valleys are the swampy meadows, which are popularly known as the ‘bohera’ in the local language. 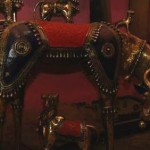 If you want a break from the jungle safari you can head to this Museum that will take you back in time. The museum has kept all the personal belongings of the Maharaja of Rewa. It also showcases the stuffed body of the first white tiger that was spotted by the Maharaja of Rewa. You can also find a lot of hunting equipments and personal gear of the king at the museum.