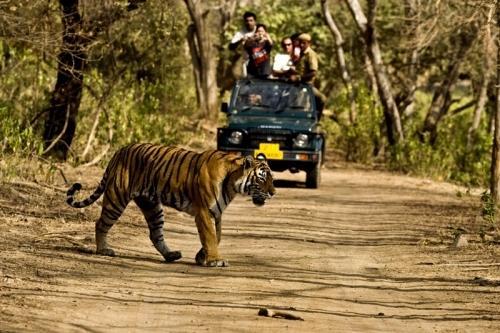 With its constantly changing terrains and climates, India has some of the world’s richest biodiversity. The combination of geographical and biological diversity makes the country a nature lover’s delight. For both a first-time adventurer and a seasoned wilderness lover, the Jim Corbett National Park, located in Uttarakhand’s Nainital district, is an important destination to explore. Due to its location (between the Himalayas), and the various habitats of the terai region, Corbett is home to many species of birds, plants and animals.

India’s oldest national park (established in 1936), Jim Corbett was originally set up as a conservation initiative for the endangered Bengal tiger. It was the first park under India’s Project Tiger program. While Jim Corbett National Park, named after a famous hunter, conservationist and writer, is most renowned for tigers, the Park is also home to a wide variety of elephants and birds.  Its location makes it a great destination for birdwatchers, who visit throughout the year to spot a wide variety of our feathered friends. Birds which have made the park its home include rhesus macaques and peacocks. Of course, a population of tigers means that there is an abundant supply of prey, in the form of deer (spotted, hog and barking deer) and monkeys.

But do you get to see the tigers?

More often than not, you’ll hear accounts from visitors that they did not spot a tiger. However, people who are not well-versed with nature often don’t understand that the Park is not a zoo, and you need patience, an understanding of the tiger’s movements and most importantly silence to spot a tiger.  Wildlife photographers often spend hours in silence, hidden in camouflage, waiting for a tiger to emerge. Nonetheless, the various Tiger Safaris are a great way to venture into nature and spot other wildlife. Trained guides are helpful for helping one read pugmarks, understand the various calls made by the animals and understand the habitat at large.

The Park sources its water from the Ramganga River, one of its largest perennial water sources. The Ramganga is home to crocodiles, fish and gharials (an endangered species, also known as the fish-eating crocodile). This in turn draws birds, which like to hunt fish, including the rare Pallas’ Fish Eagle and the Tawny Fish-owl, to the Park. More commonly seen hunting on the waters for fish are the kingfishers, storks, and sandpipers. The Ramganga’s winter guests include long-distance migratory travelers like herons, plovers and ducks.

How to enjoy the experience

The most important thing that you need to worry about here is the accommodation. Read reviews about the various lodges, resorts and cottages in and around the Park before making your bookings. Look for great deals online, and explore seasonal offerings.  Additionally, while you may be tempted to take along a laptop, use it only to watch movies. Forget email, Facebook and other online diversions. If you don’t get data connectivity or even a phone signal, don’t fret – it’s a great way to stay free of the urban life’s distractions for a few days!