The state of Uttarakhand (meaning the Northern State) was carved out of Uttar Pradesh to become the 27th state of the Republic of India in the year 2000. It is also often referred to as the Land of the Gods, mainly due to the many Hindu temples and holy cities; some of which are the most auspicious pilgrimages for Hindus, found in the state.

Tourism in Uttarakhand largely falls under three categories; leisure, adventure and religion. Uttarakhand is the choicest location in India for holidays, simply because of the stunning panoramic views that the state offers. There are many hill stations that see a heavy footfall of domestic and international tourists every year.

wn as the Queen of the Hills, is one of India’s oldest and most popular hill stations. Its green hills and varied flora and fauna make it colourful and picturesque; especially with the extensive view of the Himalayan snow peaks towards the north and the gorgeous view of the Doon Valley towards the south that it offers. 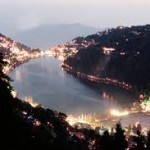 This beautiful lake resort nestled amidst seven hills in a lush valley is another of India’s oldest hill stations. Its name was derived from the erstwhile temple of goddess Naini which once stood on the bank of the lake, destroyed by a landslide in 1880. Nainital remains crowded from April to November, as a tourist destination as well as an escape from the heat of India’s northern plains. Naini Lake is famous for boating and yachting. Other activities like horse riding, skating, golf, rock climbing and fishing (with prior permission from appropriate authorities) are also popular.

A military station that was originally developed by the British, Lansdowne currently caters as the recruits training centre for the Garhwal Rifles. The place is quaint and pleasing with its old world charm and military activity. The weather here remains pleasant through the summer and is very cold during the winter. Apart from the charm, the perfect weather and the natural beauty of Lansdowne, the war memorial at the Parade Ground of the Garhwal Rifles is also an attraction for tourists. 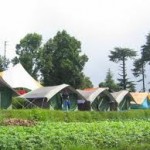 A newly emerging tourist destination in Uttarkhand, Dhanaulti’s wooded slopes, cool breeze, warm locals and once again, enchanting view of snow covered the Himalayas often come as a surprise to visitors. On the Chamba – Mussoorie highway, Dhanaulti is also the base for many trekking trails, especially through the Tehri region of Garhwal. 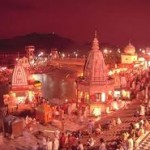 One of the seven holiest cities for Hindus, its name means ‘The Gateway to the Gods’. It is widely believed that the Gods left their footprint here. Haridwar sits on the banks of the holy Ganga River and on its ghats, pilgrims gather in throngs to take a ceremonial bath, to conduct last rites of their loved ones and float Diyas or lamps in offering to the lords. 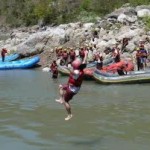 Yet another Hindu pilgrimage destination, Rishikesh is popularly known as the Yoga capital of the world. By this virtue, it attracts both domestic and foreign tourists. Also situated on the Holy Ganges, it is surrounded by the Shivalik ranges on three sides. Rishikesh is also becoming a major white water rafting centre in India. 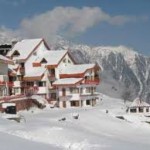 A great winter resort, Auli has a 3-kilometre long skiing slope ranging from a height of 2519 m to 3049 m. The Auli resort is run by Garhwal Mandal Vikas Nigam, which maintains snow beaters that ensure that the slope is fit for skiing at all times. It also has a 500 m long ski lift that carries skiers back to the slope top.