India and Indians are seeped into both culture and cuisines. The incredible diversity of both, ensures that no one in  India, whether Indian or foreigner, can ever have enough of either. And when it comes to cuisines, perhaps nothing creates more allure and hides more tales than Indian desserts. Every state, every major city will have a sweet to call its own. From the decadent sweetness of Hyderabadi Khubani ka Meetha, to the earthy pull of the barfis of the north, Indian desserts are a palette of flavors and aromas so vast and engulfing, a dessert trail across India can easily last a lifetime and that lifetime will not be a wasted one.

However, while everyone knows about Roshogolas and Gajar Halwas, we have focused on some more regional desserts which are prized in their home regions but are not as commonplace in other parts of the country. So here we are, with  5 Indian desserts that the local mithaiwala will probably never tell you about (but you should know). And believe us, a quest for just these 5 sweets can have you crisscrossing the country! 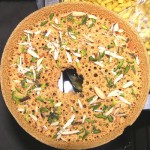 A yellow colored disc-shaped sweet, Ghewar is the specialty of Rajasthan. It is mainly prepared during the Teej festival and is made with flour and sugar syrup with variations of mawa and malai. In Rajasthan, Jaipur is especially famous for Ghewar. This sweet is also very famous in the adjoining states of Uttar Pradesh, Haryana, Delhi, Gujrat, Madhya Pradesh but relative unheard of, outside this region. 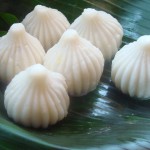 Modak is the favorite food of Lord Ganesha and is thus significantly popular amongst the Maharashtrians. It a coconut and jaggery filled dumpling made from rice/wheat flour and maida. The dumpling can be fried or steamed. The steamed version, called ukdiche modak, shown in the image, is eaten hot with ghee. Modaks have a special importance in the worship of the Hindu god Ganesha, as it is believed to be his favorite food. During Ganesh Chaturthi, the puja always concludes with an offering of twenty one modaks to the deity and as prasad. 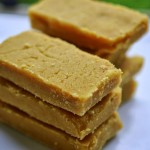 As the name suggests,this sweet was originally created in the kitchens of Mysore Palace. It is made up of gram flour, sugar dipped in large chunks of Ghee and is yellowish in color. Legend is that Mysore pak was first created by a palace cook named Kakasura Madappa. He simply made a concoction of besan, ghee and sugar. The sweet that was created, delighted the royalties so much that it became a “Royal Sweet”. 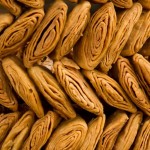 Khaja holds a special significance in the Puri district of Odisha. It is the favorite sweet of Lord Jagannath. Legend has it that God himself instructed a man to prepare this this by appearing in his dream. It is then deep fried until crisp. Then a sugar syrup is made which is known as “Paga”. The crisp croissants are then soaked in the sugar syrup until they absorb the sugar syrup. In Kakinada, Khaja is dry from outside and full of sugar syrup from inside and is juicy. 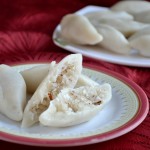 Its a special type of rice cake that is made on the occasion of Bihu. It is one of the tastiest sweets of the Assamese cuisine. It can be of different types including one that of a salty flavor. Sweet pithas typically include sugar, jaggery, date juice, or palm syrup, and can be filled with grated coconut, cashews, pistachios, sweetened vegetables, or fruits. Sweet pithas are also often flavored using cardamom or camphor. Depending on the type of pitha being prepared, pithas can be fried in oil or ghee, slow-roasted over a fire, steamed, or baked and rolled over a hot plate. Pithas are often eaten at small meals such as breakfast or as a snack with tea, although there are many sweet varieties that are reserved for desserts or holidays.