“I asked my soul – what is Delhi? She replied, the world is the body and Delhi its life!”

An autumn evening, is when I picked up Khushwant Singh’s novel: Delhi, and my understanding of my beloved city completely changed.  Having grown up in South Delhi, my life has been cluttered with traffic, shopping malls and food joints, but, is that what Delhi is about? Or has Delhi changed from the richest city in the world, the greatest centre of arts and music and dance and perhaps love? Questions such as these sprang up in my mind. Questions that needed to be answered, and so I set off, to fall in love with my beloved again. 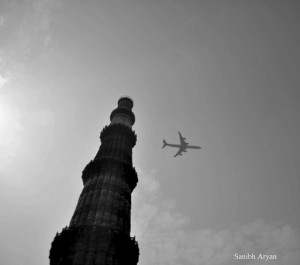 A train now runs through it, they call it the metro. It brings us together and most definitely makes travelling easier from one part to another. I took the metro first to the Qutab Minar, the tallest free standing brick structure in world. It was Qutb-ud-din Aibak laid the foundation and his successor, Altatmish, who completed its construction. A beautiful minaret, the signature of Delhi for people around the globe, the minaret is as wondrous as it is imposing. The Qutab is now a UNESCO World Heritage Site. The calm and quiet in its lawns are irreplaceable. Its peace is a mystery as it surrounded by the hustle bustle of Mehrauli – it tells me what delhi once was, and where to go next on my journey.

Chandni chowk is where I head out to, and the metro once again was my ride. I travel light, with just my camera, for Delhi can be brutal when it is busy. The train stops and I get off at Chawri bazaar station. The walk to Chandni Chowk is lined with shops selling everything from lights to marriage invitation cards, from gol gappas to old books. I first decide to visit the Grand Mosque, the Jama Masjid. The largest mosque in India, it was built by the great lover of art, Shah Jahan. It is as if time stops still when you step inside, pigeons fly in and around the mosque’s square all day, and the faithful can be seen praying in the compound. Visits to the minaret are permitted after the Namaz is complete. The minaret provides a panoramic view of old Delhi which in the days of the old, was a view of the entire city of Delhi. Through the gates of the Jama Masjid can be seen the Red fort, which would be my last destination. 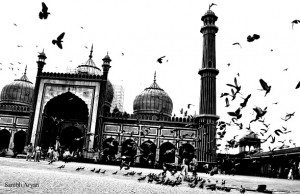 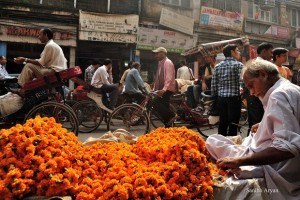 I take the Paranthe Wali Gali to Chandni Chowk. And I cannot but help having some of the most delicious paranthas, which suffice for a most wonderful luncheon. Nearby is Karims, one of the most wonderful places to eat kebabs in the city. These places have preserved the traditions of the city of old. Food has never been a problem in Delhi, for it has the most deliciously inviting places to eat like the ones I just mentioned, or the famous chaats of Chandni Chowk. Chandni Chowk has always been a place of wonder, having seen several Durbars and parades of Kings. It was built by Shah Jahan as a part of Shahjahanabad, which is now called old Delhi. The street houses several religious places, the Gurdwara Sees Ganj Sahib,  the Lal Mandir, the Central Baptist church, and the Fatehpuri Masjid.  A confluence of culture and religions is Chandni Chowk, for centuries have my fellow Dilliwalahs lived here, together and in peace, peace which was occasionally shattered by invaders and politicians alike. The street also has several shops, selling everything from jewelry to the best camera equipment available. This is my Delhi, long forgotten but still home. The Chowk too points me to the fort, the Laal Quila. 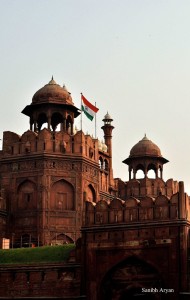 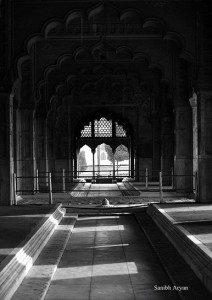 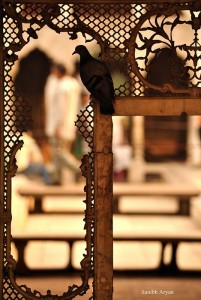 The Red Fort, the ramparts of which have served as the place from which several prime ministers  have given speeches to celebrate India’s independence day. The Laal Quila, built by Shah Jahan, has been home to the kings of the Mughal Empire. Not many have seen beyond its imposing red walls, but one must if he or she gets a chance to visit Delhi. The fort houses several structures inside. The Diwan-e-am and Diwan-e-khaas have served as halls for the audiences of the king. The Diwan-e-khas has the words of the great Sufi poet Amir Khusrou inscribed on its walls: “If there be a paradise on earth, it is here, it is here”, summarizing what the city meant to its Mughal rulers. The Moti Masjid built by Aurungzeb as his private mosque, is a very peaceful and beautiful structure inside the fort. Through the lawns runs the Nahr-I-Behisht, the stream of paradise, which would keep the area cool during the hot Delhi summer. The fort depicts the grand lifestyle of the rulers of this great city that is Delhi.

It was a tiring day, a long day, but was a most wonderful experience. This is not even a tenth of my city but some of the answers have been found, one can still feel the soul of Delhi, it is not only in the airports and the stadiums that Delhi lives, but in its Chandni Chowks and Lal Quilas that its history lies untouched and unchanged, for you to unravel it on your next trip, and you are most welcome to my home.