Festival of lights, Diwali is one of the biggest religious celebrations in India. Symbolising homecoming, prosperity, happiness, love and warmth, Diwali is celebrated with great zeal and enthusiasm across India. Different parts of India diversified by religion and cultures have their own reason to celebrate Diwali, while the most popular being the legend of Lord Rama and his wife Sita returning to their kingdom, Ayodhaya from exile after defeating the demon, King Ravana. 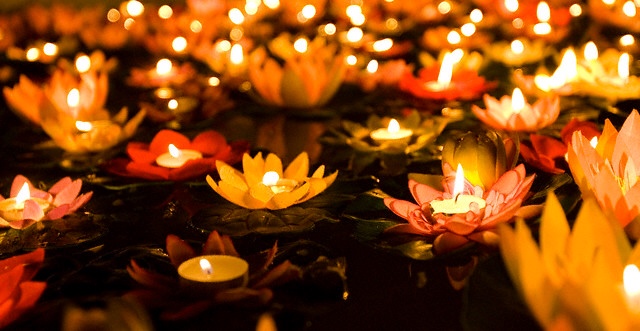 Here are some lesser known things about Diwali :-

Diwali is one of the oldest rituals for Kashmiri Pundits. The celebrations also find a mention in ‘Nilmat Puran’. The festival is celebrated as ‘Sukhsuptika’ which means sleep with happiness. The celebrations start from Ekadeshi and last till Amavasya. On Amavasya, elders of the family keep a fast and worship Goddess Laxmi after sunset. Earthern lamps are placed in temples, cremation grounds, courtyards, streams and lake hill houses, cow sheds, shops, etc.

Diwali is also the anniversary of Guru Hargobind ji being released from prison at the Gwalior Fort. Golden Temple is illuminated with colourful traditional lamps. Thousands of devotees gather in and around the temple for the grand Diwali celebrations. Fireworks at night recreate the glory of the past.

This day is celebrated as ‘Kali Puja’ in West Bengal. People worship an avatar of goddess Durga, Kali. Prayers and rituals commence and carry on till late in the night. People come together at the neighbourhood venues to feast on a sacrificial goat.

Narak Chaturdashi is called Diwali in Goa. Huge effigies of Narakasura, the demon, are made and burnt. After burning the effigies, the menfolk return to their homes for a massage by their wives/mothers by the same oil and ‘utnem’. The family then visits the local temple and feasts on ‘foav’ sweets.

This day begins with all members of the family taking a traditional oil bath before sunrise. It is customary to take a small quantity of ‘Deepavali Lehiyam’(medicinal, ayurvedic paste) after the oil bath, wear new clothes and then have breakfast. Items like veli appam, ukkarai, idli, chutney, sambhar, jangir, pathir peni and/or one variety of poli are prepared for the feast.

A typical Marathi family, starts Diwali celebrations with ‘Vasu-baras’. It is a celebration held in the honour of cows. Married women offer prayers to the cows having calf. It symbolises a woman’s gratitude towards cow for serving them and their children.