A Trip to the Ranakpur Jain Temple – by Nishank Verma

The Ranakpur Jain Temple is perhaps the most massive Jain temple in India, with the compound sprawled across 40,000 square feet. Within this huge complex lie three temples, but the main attraction is the Adinath temple, built for Bhagwan Adinath, the first tirthankar of Jainism. The huge temple made in light marble-stone is around 600 years old, though the date is often debated. 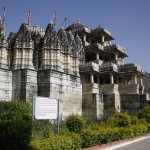 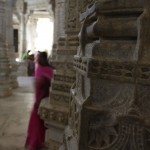 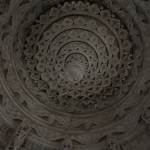 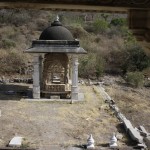 This is a chaumukhi mandir, which means it has faces or gates on all four sides, facing the cardinal directions. However, only one gate is open these days, in front of which are the functioning prayer hall and a huge idol of Sri Adinath. The other three faces are identical but no assembly is held there. Hugely famous for its 1444 pillars, the grand structure is actually an architectural marvel that took 63 years to make and is beautiful to look at, both from the outside and the inside, adorned by intricate carvings. The building boasts of 24 domes and its grandeur can assessed by the supposed Rs. 15 crores that it cost to build, nearly six centuries ago. Said to be the biggest Jain Temple of all times, the sprawling temple has an equally big basement with 84 rooms. However, the entry to the basement was permanently closed with a marble slab for the absence of electricity and light resulted in many accidents. 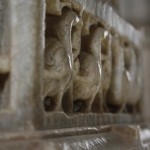 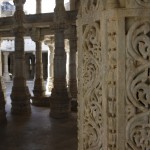 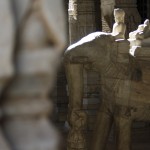 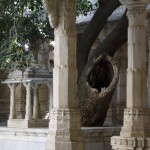 At the Ranakpur temple, I was greeted with warm smiles and a tilak on the forehead by ladies in colorful saris. Since I was wearing shorts, I was given a pair of sky-blue pajamas to wear and no leather-ware is allowed inside. A most amazing fact about life inside this temple is that lineages of the Maker, the Architect and the first Pujari of the temple continue to be active till date; such that all prayers are conducted only by the descendants of the first pujari, any repair work is taken care of by the descendants of the architect and the temple is under the care of a trust managed by the descendants of the maker of the temple. This information was shared by Sachin, 19, a 17th generation Pujari in the temple, one among the 150 working pujaris of the family. I also met Sujal, 7, representing the 18th generation of the family, slated to carry on the work of Pujari when he grows up.

About the famous 1444 pillars, many things are noteworthy. They support the whole structure of the temple in the absence of any walls. Out of these 1444, no two pillars are alike and have different stories to tell. Some of the carvings convey stories and meaningful fables, while others just present beautiful images and some have real-life references. One out of these 1444 pillars has been intentionally made slanting so as to ward off evil spirits, with the common Hindu belief that making a perfect structure will invite the evil eye. Also it is widely fabled that no one can ever count the exact 1444 pillars. The symmetry of the pillars is such that you get a glimpse of god from wherever you’re standing inside the temple. Idols of various gods line the walls of the temple on all sides, and amazingly, the idol you see in front of you from any place in the temple is the same as the idol on the opposite end.

Apart from these beautiful pillars, installations and carvings of religious, historical and artistic value are to be found are to be found in all directions inside the temple. One beautiful carving for example is made out of a single marble rock in which there are 108 heads of a snake, and numerous tails, in which no one can find the ends of these tails. The tales behind these installations are numerous and the priests are more than happy to share their knowledge. 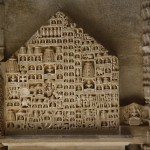 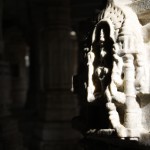 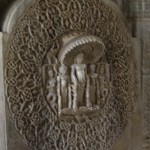 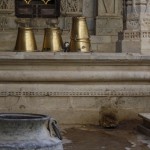 The Ranakpur Jain Temple also serves as a resting ground for Jain families touring this region. It has dharmshalas inside the compound for pilgrims to stay at minimal rents. The tourists staying here often have visits to places like Sadri, Falna, Ghanerao, Mucchal Mahavir Temple and Narlai etc. on their itineraries. Also, often god men and preachers of the Jain sect make this complex their base ground. 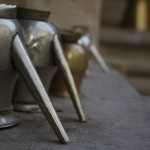 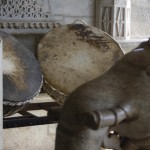 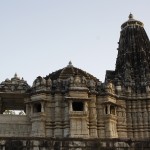 The temple’s bhojanalay or canteen, next to the grand entrance of the compound serves food twice a day. The ‘all-you-can-eat’ thali costs Rs. 25 and everyone is served after the priests. I enjoyed an extremely pleasurable, simple meal made in the ideal Jain style without onion, garlic or heavy spices. It simplicity in no way made the meal tasteless or ordinary. The feast included pooris, sukhi Moong dal, lauki ki sabzi, kadi, which is astonishingly white in color instead of yellow, a tasty khichdi, papad, and to top it all up, aamras as dessert. The canteen propagates the concept to two light meals a day for healthy living and therefore serves once in the morning at 9am and then in the evening at 5pm. However, you can eat all you want and the gracious servers refill your plate many times without losing their smile!

The visit to the temple was a day spent like no other. The majestic marble structure, the pristine cleanliness of the place, the scenic flowers and trees, and the peacefully deafening silence at this spiritual abode amidst mountainous forests is simply delightful. The beautiful carvings of Gods and Goddesses on the temple walls and the architectural marvels make for sheer photographic delight. I came out feeling happy and relaxed.