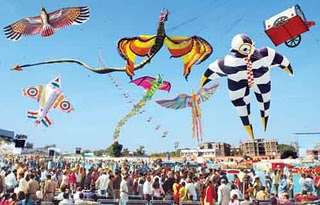 The festival’s colors, sparkle, and vibrance of Jaipur pull tourists from India and beyond. Recognized for its regal and royal welcome, the capital of Rajasthan is one of the most visited cities of India. Each month, numerous tourists travel from great distances to unify with the people and the festivities of Jaipur.

The locals celebrate each season, occasion, and event with great jubilation. Here are some festivals that one must visit the pink city for! 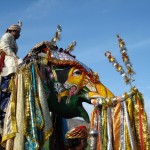 This festival is celebrated on the auspicious day of Holi wherein all elephants are adorned with garlands, jewelry and colored powder (gulaal). The female elephants wear beautiful anklets and the owners proudly showcase the talents of their elephants to the masses. Elephant polo, dances and tug-of-war games between the elephants are a part of the celebration. At the end of the day, the most beautiful and magnificently decorated elephant and its owner are awarded a prize. 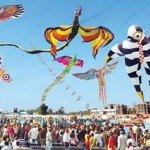 This festival marks the celebration of Makar Sankranti, an Indian festival that welcomes the arrival of the spring season. One of the biggest and most cherished festivals, Sakranti brings all family members, young and old, together to compete with each other with their colorful and sky soaring kites. This three-day festival commences on the day of Sankranti at the Jaipur Polo Ground, where Indian Air Force helicopters release kites in the sky and schoolchildren release balloons from the ground. A kite flying competition is held where participants compete for their kites’ designs. On the final day, the kite fight takes place and the winner is awarded with a gracious prize. 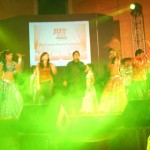 Jaipur International Film Festival is held every year in Jaipur for five days in January. It started in 2009 and is slowly becoming one of the biggest and most popular film festivals in India. The 3rd JIFF 2011 received a wonderful response and 600 film entries were received from over 67 countries out of which, 144 were screened. This festival encourages new filmmakers to showcase their talent and also promotes camaraderie among people of the world through the medium of films and communications. 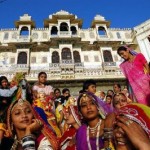 This festival is an initiative of the Jaipur Citizen Forum, which was established as a charitable trust to promote and encourage the rich culture and heritage of the pink city. In 2006, JHIF became the first city festival in the world to receive recognition from UNESCO. This extensive festival covers activities from musical nights to regional movies; book readings and a car rally for the visually challenged among many other events.

This is an annual literary festival that was inaugurated in 2006. The tiny and ethnic Hotel diggi Palace is the venue for this festival and attracts over 30,000 literary enthusiasts from all over the world.  In 2006, the festival took birth as a part of the Jaipur Heritage International Festival and became an independent affair in 2008. The 2011 festival had speakers such as Barkha Dutt, Candace Bushnell, lyricists like Gulzar, Javed Akhtar, Prasoon Joshi and Nobel-winners J.M. Coetzee and Orhan Pamuk to name a few.