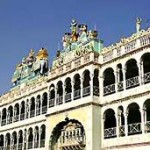 A ‘Haveli’ is a term used to describe a private residence in some parts of the Indian subcontinent. The word originated from a Persian word which referred to an ‘enclosed space’. In context of Rajasthan, the word was originally used to refer to temples that were built like huge mansions and were dedicated to Lord Krishna and were especially noted for their frescos depicting scenes from daily life and religion.

Eventually, with the rise of the Marwari trader/businessman, grandiose architecture which was once reserved for the gods was replicated for their personal homes. Between 1830 and 1930, many Marwaris constructed luxurious houses in their homeland of Shekhawati and Mewar, which became symbols of their status and representative of their success.

A typical haveli in the Shekhwati region consisted of two courtyar

ds – The outer courtyard served as the extended threshold of the house and it was from here that the men of the household mostly conducted their business. The inner courtyard on the other hand was mostly the domain of women. It was around this courtyard that the living chambers were built, often forming a square or rectangle enclosing it with. These havelis were built to house large and extended families and therefore had many rooms. In cases of the exceptionally well off Marwari, there could be numerous courtyards and stories of living chambers. 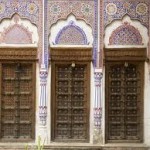 Highly inspired by Mughal architecture, these havelis usually have ostentatious carvings on their walls, beautiful and lively frescos; intricately carved jharokas (balconies), chajjas (sunshades), grand archways and elaborate wooden doors. The havelis of Shekhawati have become famous over the years as major tourist attractions in Rajasthan.

Interestingly, motifs for paintings changed in the 19th century and themes of telephones, trains, cars, balloons, British hunters and gramophones became popular amongst the newer frescos. While the Patwa havelis of Jaisalmer is perhaps the most well known in Rajasthan, beautiful havelis can be found in places like Churu, Jhunjhunu and Sikar.