Some 80 odd kilometers northwest of Udaipur is Kumbalgarh, the 15th-century fortress built by the legendary Rana Kumbha. Situated some 3500 feet above sea level, the fortress was such that it provided a clear view of any armies forging towards them. The fortress was virtually impregnable for four centuries and was occupied and growing until the 19th century. The 36-kilometer long wall along the perimeter of this fortress is the third-longest wall after the Great Wall of China and the Great Wall of Gorgan in Iran. The fortress also houses over 300 temples and now also has a wildlife sanctuary covering 578 square kilometers. 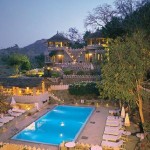 One of the 15th-century buildings, credited to Rana Kumbha has been converted into yet another quaint hotel by the HRH Group of Hotels. Hidden by trees, crowned by the awe-inspiring Kumabalgarh fort is Aodhi, the sanctuary resort. A mere two kilometers from the fort, the Aodhi is the best place to explore Kumbalgarh from. 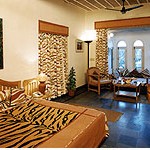 The hotel has 26 rooms in total – 3 deluxe suites and 23 deluxe rooms which are small but delightful as they recreate themes of jungle lore. While they might not be luxurious, they have all the basic modern facilities for an extremely comfortable stay. The hotel also provides business services on being given prior notice. 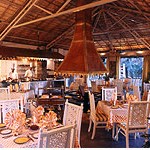 In terms of dining options, the hotel has two restaurants. The Chowka (literally meaning the kitchen) serves a scrumptious multi-cuisine fare. Like in all HRH hotels, the menu includes a full feature of Rajasthani/Mewari cuisine. The Chappar (literally meaning a thatched roof) is the poolside coffee shop looking over a scenic hillside that serves beverages and snacks. It can be said, however, that the food is relatively overpriced. It also has a bar, the Chowpal (which translates to the meeting place of the village elders) with an exquisite collection of both Indian and foreign liquors. Pleasantly, the French wine is priced very competitively, a rare occurrence in India. 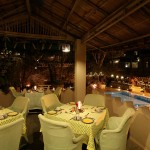 The resort abounds in natural beauty and a picturesque, lush, and hilly setting. The Kumbalgarh wildlife sanctuary is the only panther reserve in India. Though the sanctuary is supposed to house many animals, the variety of birds to be spotted here is far more gratifying.

The superb dining experiences, intimate rooms, captivating surroundings, and warm service, and the great view of the Kumbalgarh fort make the Aodhi a must-do weekend destination.