The city of Udaipur is famous across the world for its historic charm, romantic palace hotels and beautiful museums and forts. It is also known for the artistically built temples that attract tourists and pilgrims in throngs. These are the numerous temples in and around Udaipur that are famous for their architecture or for their sanctity.

Temples of Udaipur are followings: 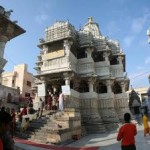 Located within Udaipur’s famous City Palace complex, the Jagdish Temple is a large Hindu Temple that was built in 1651 by Maharana Jagat Singh during his reign. Its architectural style is distinctively Indo-Aryan as it has been raised on a tall terrace and has a double story mandap (pavilion) which is connected to a double story sanctum. The fact that many lanes that start from the old city walls converge at this temple makes it apparent that the Jagdish Temple has held a position of significance for the residents of Udaipur from the very beginning. 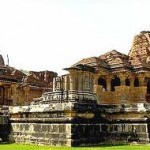 re 22 kilometres from the city of Udaipur on National Highway No. 8, the temple is located in the town of Eklingji or Kailashpurji. It is widely believed that Eklingji is the ruling deity of the princely state of Mewar and the ruling Maharana is his representative. The construction of the temple was commenced way back in 971 by the Sisodia dynasty of Mewar in honour of Lord Shiva. The beautifully sculpted temple complex includes 108 temples, made out of marble and granite. The Maharana of Udaipur continues to pay the temple a private visit every Monday. 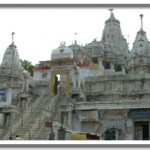 An important and sacred temple for the Jains, the Rishabhdeo Temple is situated in the town of Dhulev, 65 kilometres from Udaipur City on the Udaipur-Ahmadabad highway. It is dedicated to Bhagwan Rishabhdeo, the first Jain saint. In this town, Rishabhdeo is also known as Kesariaji, by virtue of the large quantum of saffron offered to the deity at this temple. The Rishabhdeo Temple is considered one of the main religious institutions of Mewar. Interestingly, there are about 65 inscriptions on the buildings and on some of the idols of saints that provide keen insight into the temple’s history. 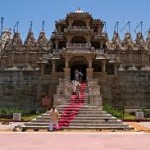 ilometres away from the city of Udaipur, Ranakpur sits on the Udaipur-Jodhpur highway. The massive temple spreads over 48000 square kilometres and is built in white marble and amber stone. The temple has four entrances that face the cardinal directions and built to imitate the patron’s vision of a celestial vehicle. Though it was the passion project of two industrious Jain businessmen, it was commissioned by Rana Kumbha, one of the most illustrious Rajput kings of all times. This temple is also dedicated to Bhagwan Rishabhdev or Rishabhdeo also known as Adinathi.

The Ambika Mata Temple is a small but beautiful shrine to the goddess built in the crevice of rock some 58 kilometres south-east from Udaipur City. Since the temple is located in a town named Jagat, it is offered referred to as the Jagat Temple. Dating back to the 10th century, the temple is often referred to as the Khajuraho of Rajasthan.  It is pentagonal in shape and enclosed by a massive rampart wall, has 17 turrets and a pagoda a roof. Many of its fine sculptures have been excellently preserved. The walls have exquisite carvings of gods and goddesses, musicians, dancers, singers as well as countless beautiful women.

ards the northeast of Udaipur is the small town of Nathdwara, situated on the banks of the Banas River. The famous Shrinathji Temple in this town dates back to the 17th century and is dedicated to the 14th century, infant incarnation of Lord Krishna. The idol was originally worshipped in Mathura but was moved to many places before landing up here in order to save it from the intolerant hands of Aurungzeb. Legend has it that when priests were on the run with the idol, the bullock cart carrying it sank ankle deep in mud and could not be moved further no matter what. They realized then that the Lord himself had chosen that particular place in Rajasthan for the temple to be built.