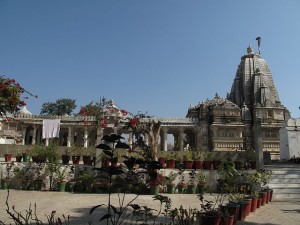 Once upon a time, the Rana of Mewar was on a hunt in Ghanerao, in the Pali district of Rajasthan, when he ventured upon a temple of Lord Mahavir. The priest offered him refreshments and prasad. Much to Rana’s amusement, the prasad has white hair, probably from the priest’s head and he cracked a joke about the lord having a moustache. Failing to understand the humour and probably stumped for an answer, the priest said yes. Carrying on with the joke, the Rana told the priest that he would return in three days to see the Lord’s moustache.

Not knowing what else to do and fearing his life since the Rana would return to not find a moustache, the priest spent the next two days in prayer. Eventually, he gave up and decided to take his own life rather than be at the mercy of the king. He picked up a dagger to do the deed, only to have Mahavir appear and stop him. The Lord told him to cover the face of the idol with a piece of cloth and to ask the king to remove the cloth himself after offering prayers.

The king arrived the next day and the priest requested him to do as the Lord had asked him to. Seeing the cloth covering the idol, the angry king demanded an explanation. The priest repeated the lord’s instructions and he eventually agreed. When he removed the cloth after offering prayers, the idol of Mahavir not only had a moustache but also a beard!

The king repented his behaviour and begged for forgiveness. Needless to say, he was forgiven and the beard and moustache disappeared. The name however stuck and since then the Lord at this temple has been called ‘Mucchal Mahavir’ or the Mahavir who had a moustache.

Ghanerao is a little over 20 kilometres from Ranakpur and the temple in question is over 80 years old.