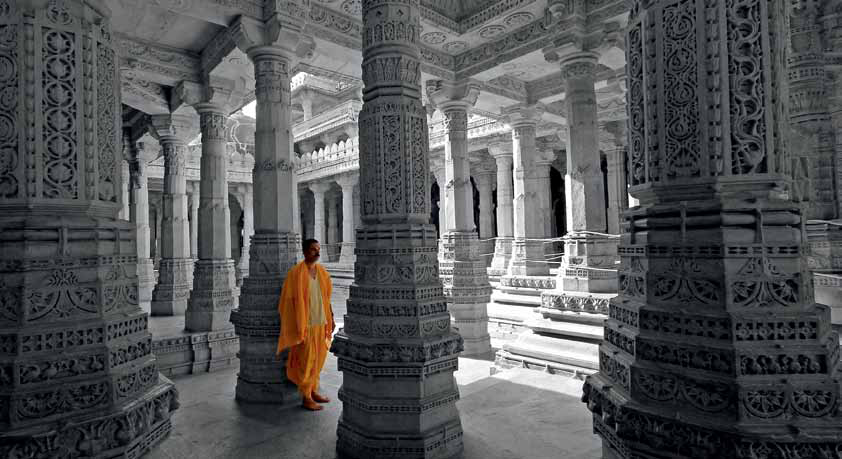 A wizened Rajasthani sporting a tomato-red turban and fake aviators sped along on his motorbike. Village belles with neatly done-up hair and glittering odhnis sashayed down the roads armed with pots of water. Herds of goats, cows and buffaloes were the only reasons why our cab driver had to use brakes as there was literally no traffic on the roads. Comfortably low hills (the Aravalis), gurgling mini streams and waterfalls kept my husband, daughter and me enthralled throughout the two-hour drive from Udaipur airport to Ranakpur. In Desuri tehsil near Sadri town in Pali district, this tiny town lies on the western side of the Aravali range. Jodhpur is another 3 hours away, approximately 160km.

When we reached our destination, Mana Hotels, we were given the traditional welcome with tilak and aarti, and a refreshing glass of rose sherbet. The property is truly a manna for the soul, providing spiritual nourishment and a feast for the eyes. This designer boutique hotel is spread over a generous 3.5 acres and has luxury villas apart from rooms and suites. With a separate dining area and charming outdoor seating, each villa is an experience in itself. Efforts are to marry the cutting-edge contemporary interiors with traditional Rajasthan – so you come across typical Rajasthani statuettes, a camel cart, and even indigenous vibrant tablecloths in the dining area.
One more thing we liked about Mana – the reception has an LCD screen that displays photographs and information about local sightseeing options for first-time visitors. Recognized by Trip Advisor as a Traveller’s Choice hotel in Ranakpur for 8 years running, this hotel has managed to carve a unique niche in this traditional town. Some of the dishes on the menu also deserve special mention – the generous Rajasthani thali, the delicious laal maas, and the simple but flavourful dal tadka. And one more thing that makes the guest feel really at home – Maggi!

The pride of Ranakpur is the Jain Temple. Built in the 14th century, this impressive four-faceted marble structure spread over 48,000 sq ft has a beautiful facade, with numerous carved domes surrounding the main one. Dedicated to Adinatha, the first Jain teerthankar, it’s said that this temple took over 50 years to build. Legend has it that Dhanna Shah, a Porwad (belonging to an ancient Jain community from southern Rajasthan), saw the design in his dreams. He got it built under the patronage of Rana Kumbha, the then ruler of Mewar. Foreigners are allowed after 12 noon. Shorts, sleeveless shirts and any kind of leather is not permitted inside the temple. They are strict about the rules such as … since I was in a sleeveless kurta, I had to take an odhni on rent – a pretty pink-and-green piece which I was happy to wear! As soon as you step inside, high ceilings and intricate pillars take your breath away. It’s said that no two pillars are the same, and that it is impossible to count all the pillars – you come up with a different number every time! The ceiling is divided into large blocks, each is different, and the designs stand out. One pillar is deliberately kept slanting to avoid perfection: “Nazar na lagg jaye!” explains our guide. There are smaller shrines on the sides for the other Jain gods. Next we took a look at the Sun Temple, right next door (and originally an extension of the Jain temple), which has now been taken over by the Udaipur Royal Family Trust. Though much smaller, the carvings have the same magnificence.

Ranakpur is famous for its traditional durries. They’re made using four materials: cotton, silk, wool, and a combination of camel and goat wool. The threads are dyed with natural colours – mehndi, haldi, coffee, saffron and the like. They’re woven on a hand-operated loom with a system of interlocking (horizontal threads are passed over and under vertical ones) which guarantees durability. The smallest piece takes at least two weeks to make. The durries can be handwashed, the colours don’t run; and since it’s such a tight weave, they also do not lose their shape. It’s a tough art, especially when using the rough camel and goat hair since these cut into the karigar’s fingers. But these create unique fire and water-proof pieces. The karigar actually placed a lit match on the camel-and-goat-hair rug, and it remained ‘unharmed’ till the flame blew itself out! The artisans have realised the value of their talent and you won’t get anything for less than Rs. 3,500, which is fair considering the time and effort that goes into making the durries. They’re ready to create modern patterns on request. You can also order from your respective city and they’ll courier your durrie across. Credit card facility is available too. We then drove to Ranakpur Dam, half an hour away. And took the short walk uphill to one of the most scenic views of the river Magai. Calm and serene, it was a rejuvenating sight.

Another half an hour’s drive away, during which you’re sure to spot langurs, peacocks, mongooses and of course camels (we a saw a rare black one too!), is the Muchhala Mahavirji temple. The pandit ji gave us a warm welcome and told us the story behind the unusual name. Hair from the temple pundit’s moustache fell into the prasad which was offered to the then king of Udaipur. Scared, the pandit said it was hair from the god’s moustache. Despite the fact that Mahavirji did not have a moustache, he appeared before the king wearing one, and since then the temple has an idol of the lord with a moustache. Also made of marble, this temple has some unique sculptures, including one of Kuber with his treasure chest.

Another half an hour away is Camel Charisma, an NGO that aims to diversify income opportunities for poor camel owners. So they make soaps out of camel milk and paper products – diaries, photo albums and more – out of processed camel dung. All with heavy-duty machines in a separate enclosure along with an array of ‘clotheslines’ with clothespins on which the sheets of paper are hung out to dry. There are also socks, gloves, shawls, caps and more made of camel hair, which made ideal gifts for friends and family! On our way back, we stopped at a local textile shop and bought traditional odhnis. The sporting shopkeepers wore the traditional attire, complete with pagdi, and posed for us.

Kumbhalgarh Fort, with a 36km perimeter wall, is said to hold the distinction of being the second-largest man-made wall after the Great Wall of China! We took the longer route to the airport the next day so that we could stop there on the way – it takes one hour to reach Kumbhalgarh, and another two hours to reach Udaipur airport from there. There are over 360 temples within the premises! It’s a 1km long uphill walk to the fort (it’s 1,100 metres above sea level), through the many fortified gateways where we stopped and sat to catch out breath, but well worth the effort for we got a marvelous view of the Aravalis.
Though it was built between 1443- 1458 AD (by Maharana Kumbha), the upkeep of the fort is good, including landscaping; greenery and flowers abound. And once you reach the fort, climb the many stairways, have a look at the ancient canons and water structures (ponds, stepwells and more), take a peek at the hills from the many jharokhas, and just explore the sprawling fort to your heart’s content! Do remember to carry a bottle of water along – it’s a tiring trek.
Before leaving, we picked up souvenirs at a local shop – traditional Rajasthani skirts, colourful jewellery, warm jackets with beautiful booti designs. Great mementos of an unforgettable trip!