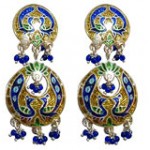 Jewellery is a very important part of Rajasthani attire. There are many unique styles and designs that tend to vary with regions. The jewellery from Rajasthan can be elegant and ornate, mostly worn by the Rajputs and royalty as well as simple and chunky worn in the tribal communities. Rajasthani men also often wear ornamentation like chokers and earrings. Thanks to the extensive mining of the Aravali range in Rajasthan, the state happens to be a noted export centre for semi-precious stones. Meenakari (the art of enamelling on gold and silver) and Kundan (the art of setting semi-precious stones in gold) are native to the state. Lac bangles from Rajasthan are also very famous. 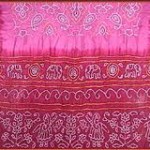 Rajasthani fabrics are vibrant and attractive. Tie and die or Bandhini involves tying up or knotting sections of a length cloth and dunking them into rich colours; usually yellow, green, red and black. The Laheriya, another technique is also achieved through a variation of the same concept. The ancient, laborious and meticulous tradition of printing with finely carved wooden blocks still survives in Rajasthan. Villages in southwest Rajasthan are very adept at needlework. Most of their attire has heavy embroidery. They also use mirrors and techniques like appliqué for variation. Khari, the art of printing in gold on fabric is also seen commonly. 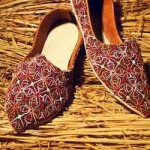 Rajasthan has a long history in leather craft and industry and leather shoes known as Jootis or Mojdis are made in Jaipur and Jodhpur. Embroidery known as kashida is done on the Jootis. In Jaipur, the embroidery is first done on velvet which is then made to cover the shoes while in Jodhpur it is applied directly to the leather. 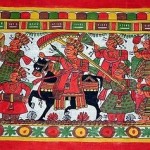 The Painting “industry” in Rajasthan has been flourishing since before the Mughals reached the Rajput courts. Over a period of time, a lot of schools of painting have flourished in the region. For example, the Mewar school, Bundi-Kota Kalam, Bikaner, Jaipur etc. The ancient narrative tradition of scroll paintings in bold, vigorous lines and bright primary colours survives in Rajasthan amongst the Phad and Pichwai communities in Nathdwara and Kishangarh.

Marble from Rajasthan has been used for the construction of famous monuments like the Taj Mahal. Marble objects range from decorative plates to boxes and animal figures. Miniature paintings on marble can be exquisite. Jaipur is the main centre for exquisite marble objects. 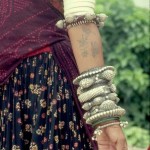 Rajasthan’s main ivory carving centres are at Udaipur, Bharatpur and Jaipur from where master ivory carvers were once favoured by the royal courts. While Jaipur was famous for its carved ivory, Jodhpur specialized in ivory bangles. The bangles were worn to cover the whole arm and they decreased in size from just below the shoulder to the wrist. The Bikaner Palace is better known and prominent for its artistic ivory inlaid doors than the palace itself. Carved ivory artefacts can be purchased in and around Jaipur but the export of ivory in any form from India is strictly prohibited. 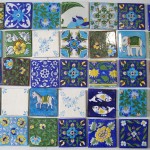 Jaipur is known for its regal blue-glazed pottery introduced in India by early Muslim rulers. The blue glaze was initially used to liven up the visual appeal of mosques, tombs and palaces. Molela, 40km north of Udaipur excels in terracotta pottery, sculpted plaques and icons of Rajput heroes and Hindu deities. An array of terracotta articles are produced in Rajasthan: paper-thin Pottery, painted pottery, white and red clay articles and terracotta wall plaques. Black pottery, better sourced in South India, makes its mark up north in the district of Dausa, west of Jaipur. 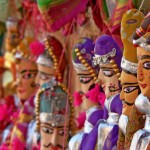 Kathputlis or wooden puppets are a common and popular form of entertainment in the villages of Rajasthan. The puppeteer is the storyteller who unwinds a folk tale or an episode from the Hindu epics – the Ramayana or the Mahabharata – along with the deft interplay of various puppets, each signifying a character in the tale.

Metal-wares: The metal-ware of Rajasthan comprises of artistic, enamelled and engraved silverware and metal-ware. Jaipur is famous for engraved brassware which is usually enamelled. 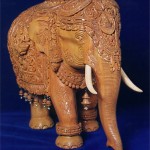 Fragrant and aesthetic; sandalwood carvings come in a wide range of themes. 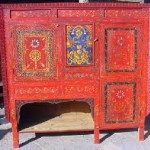 The furniture of Rajasthan is in harmony with its palaces and Havelis, displaying similar intricate design and carving. The painted furniture of Jodhpur and Kishangarh consists of screens, doors, traditional caskets, doors, traditional caskets, low tables and chairs. Delicately carved wooden doors are made in Ramgarh, Shekhawati and Bikaner. The craftsmen of Barmer specialize in the art of wood carving, and tables. Tilonia furniture stands out with its fine embroidery work on leather while white metal plated Patra furniture has a charm of its own.