Rajasthan has a rich repertoire of folk dances that are lively and colourful to say the least. These dances often tend to be the highlights of any celebration and festivity in the state. In technique and style, the dances are simple yet expressive. Much emphasis is given to every detail like costumes, make up, expressions and music. Interestingly, each performer has his/her unique style that makes each performance different and captivating. Some of the Rajasthani dances are: 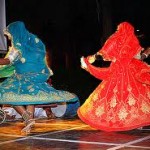 The Ghoomar is the most popular form of Rajasthani dance which is performed by women during auspicious occasions. Its name is derived from the Hindi word ghoomna which means twirling, making it obvious that it involves a lot of twirling. The sight of the women dressed in their native attire of ghaghra choli, is stunning as the beautifully coloured skirts or ghaghras flare-up gracefully.

A tribal dance often performed in Mewar, Jodhpur and Shekhawati, the Gair is performed by both men and women on the colourful festival of Holi. Keeping with the tempo of the festival, the dance is lively and full of excitement and the accompanying music is heavy on the beats, generally provided by sticks.  The performers tend to wear a long tunic or a kurta that opens out as a skirt and move in circles, first clockwise and then anti-clockwise. 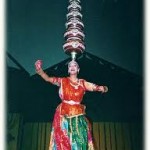 A technically challenging dance, the Bhavai can successfully be performed only by trained dancers. Visually appealing, the Bhavai is also one of the most popular forms of dance from Rajasthan. Women dance while balancing eight to nine brass pitchers in their heads, often while balancing themselves firmly on the edge of a sword or on glass.

A village dance, the Chari is an expression of happiness for when villagers succeed in their quest for the rarest commodity in Rajasthan, water. The dance involves many subtle and graceful hand formations while once again, balancing brass pots on their heads. Cottonseeds are set aflame in the topmost pot so that the movement of heads causes the flames to form beautiful patterns. 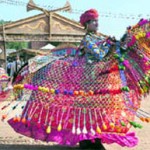 A free form dance, full of zest and fanfare, the Kucchi Ghodi or the Dummy Horse is the dance performed at Rajasthani weddings, intended to entertain the bridegroom’s party. The costumes are designed to give the appearance of riding a horse. The dance is vigorous and engaging, to say the least. It is performed to the tunes of a balladeer singing the tales of local heroes. This form of dance originated in the Shekawati region of the state.

The dance of the snake charmer community, the Kalbelia is performed by women dressed in black skirts with silver embroidery, in a fashion that is reminiscent of the graceful movements of the snake. The music is more like chants that increase in tempo and vigour as time passes. 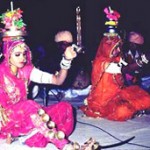 Literally meaning Thirteen Claps, the Tehra Taali is a devotional dance form performed by women of the Kamad community in honour of the folk hero Baba Ramdeo. The women squat on the floor with cymbals tied to various parts of their bodies like wrists, elbows and waist and strike them with cymbals in their hands in a constant, almost frenzied motion.