Ninety kilometres from Udaipur, along the Udaipur – Jodhpur highway sits Ranakpur, one of the 5 major holy centres for the Jain community in India. The small village is cosy and full of character and a few days spent here can help provide keen insight into life in small town Rajasthan. Nestled in a picturesque valley on the western side of the Aravali Hills, Ranakpur has carved a unique niche for itself amongst tourists and has grown to be one of the most visited destinations in the state of Rajasthan. Here is a small round up of the Tourist Places in Ranakpur:

It goes without saying that the mus

t-see destination of Ranakpur is the ancient Jain Temple. Known for its elaborate and gorgeous architecture, the Ranakpur Jain Temple is dedicated to Adinath who was the first Jain spiritual leader. The temple has four entrances, each facing a cardinal direction. It has 29 halls and 1,444 pillars which are intricately carved to represent Jain fables and symbols and it is said that no two pillars are alike. Though dedicated to Adinath, all 24 Jain Tirthankars are paid due respect with their images carved across mandaps or porticos. Each portico rises in a Shikhar or spire adorned with little bells on top which chime and create a blissful ambience when the wind blows. The temple is three stories high and has four small shrines with eighty spires which are supported by 420 columns. Built completely in white marble, the temple has a serene aura and welcomes many believers on a daily basis. The same temple complex also has a Sun Temple which is equally popular for its antiquity and architecture. Its polygonal walls which are richly embellished with carvings of warriors, horses and solar deities riding splendid chariots truly make it one of a kind. 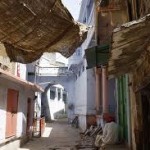 om the Ranakpur Jain Temple and is the largest local settlement nearby. The thriving centre for commercial activity, owing to its proximity to the temple, Sadri often lands up throwing up picturesque photo-ops at you. The blue houses with green doors, the colourful attire of locals in their traditional gear, ancient temples and drainage systems juxtaposed with the slightest hints at modernity make for beautiful sights. The village has many beautiful Hindu and Jain Temples; with the Varahavtar Temple and Chintamani Parshavnath Jain Temples being the oldest. The old dargah of Khudabaksh Baba also demands a visit.

gain North East) from the temple in the village of Ghanerao with its abundance of Jain and Hindu Temples. The most famous amongst them, is, of course, the Mucchal Mahavir Temple that has the honour of housing the only known idol of Lord Mahavir which sports a moustache and has two grand statues of elephants that guard its entrance. The Gajananda Temple too is famous owing to the life-sized marble statues of Lord Ganesha with his two wives who represent prosperity and spiritual prowess. Their statues are flanked with those of Hanuman and Bhairon (an incarnation of Shiva) as their protectors. The Ghanerao Royal Castle continues to be the residence of Ghanerao’s royal family. Yet a part of the property has been converted into a heritage hotel and many historical artefacts that reveal a lot about the region are up for viewing.

nown as Kumbhalmer, is a 15th century grand fortress built by Rana Kumbha. It is also the birthplace of Maharana Pratap, a great king and warrior of Mewar. Kumbhalgarh is only 18 kilometres eastwards from Ranakpur and is beautiful. Built atop a hill, some 1100 metres above sea level, the walls of the fortress extend over 36 kilometres and are 15 metres thick. There are over 360 temples within this fort, out of which 300 are Jain temples. According to legend, Rana Kumbha was initially unsuccessful in his attempts to build the fort wall, despite repeated attempts. He was told by a spiritual preceptor that a voluntary human sacrifice would solve the impediment. What happens next is not certain; as some versions say it was a soldier, others a pilgrim, and some the spiritual preceptor himself, who sacrificed himself for his king. Till today, the main gate of the fortress contains a shrine and a temple to commemorate this great sacrifice. 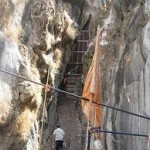 14 kilometres from Sadri Village, is the Parshuram Mahadev Temple. This Shiva temple sits in a cave 3995 feet above sea-level and it is said that Parshuram, the lord’s sixth manifestation, made the cave himself with his axe to worship Shiva in the serene foothills of the Aravalis. The cave has naturally formed figures of Lord Ganesh and Lord Shiva and also has nine kunds or ponds which never go dry. It is estimated at approximately 9 lakh pilgrims visit this temple annually.

Last but not the least, Chitto 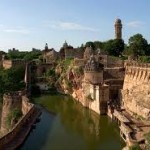 rgarh, the most important Mewari fort, is a mere 60 kilometres to the south east of Ranakpur. Chittorgarh has a dramatic history as it has witnessed many sieges and Jauhar (self sacrifice by the women and children of the city, in the face of foreign invasions). Till today, Chittorgarh remains the largest fort in Asia and it is the pinnacle of Rajput chivalry. Historically, it is considered that it was built under the Maurya dynasty in the 7th century. The fort is surrounded by a circular wall with seven large gates that need to be crossed before entering the main area. The fort and the city of Chittorgarh hold an annual festival called the Jauhar Mela to commemorate the valour of their ancestors. The fort also has an ancient but beautiful temple of Goddess Kali called the Kalika Mata Temple.