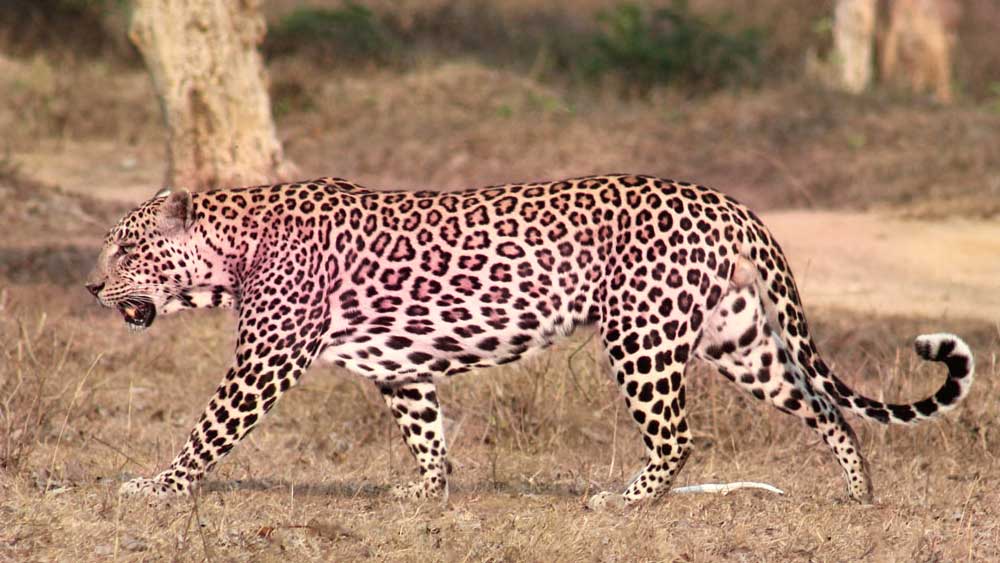 Brace yourselves travellers! This piece of news will surely get you excited to traverse the Pali district in Rajasthan. Ranakpur is the current hotspot for all wildlife enthusiasts for it is the site where the unique pink leopard was recently sighted. It has created quite a buzz ever since it has been caught on camera. Hitesh Motwani, a Udaipur-based wildlife conservationist & photographer has successfully sighted this strawberry-hued cat after a four-day search. He claimed that the animal is about five or six years old. Wildlife Institute of India scientist Doctor YV Jhala said, “The leopard seems to have a light coat colour and a natural variation but is not an albino.” Albinism is a congenital absence of any pigmentation or colouration in an animal, plant or person.

What the Locals Said

In India, the locals of Ranakpur and Kumbhalgarh do not feel this is a rare sighting, as they claim to have seen this pink leopard occasionally. Due to the vast stretch of forest land in these parts of Rajasthan the pink leopard has found it habitable and managed to survive. The Ranakpur Kumbhalgarh forest reserve is also host to several wild animals and birds. It could also possibly mean that the pink leopard has established itself as an apex predator among the smaller jungle animals. However, it is unknown whether it is a male or a female.

A rare species, this pink leopard had only been reported in South Africa in 2012 and 2019. Tourists visiting the Madikwe Game Reserve in this African country had occasionally spotted this unusual strawberry-coloured animal roaming the reserve grounds. It was first seen near the Botswana border in 2012. Scientists observe that these cats are pink due to a genetic mutation called, ‘Erythrism’, which is either caused due to the overproduction of red pigment or an underproduction of dark pigments. Little is known about the condition but it has been noted that it is unusual in carnivores while mostly occurring in racoons and Eurasian badgers.

Leopards are graceful and agile; they are genealogically related to the lion, tiger and jaguar cat family. Known for being mostly solitary, they are only with their kind when they are mating or when females are raising cubs. Being nocturnal, they spend their time hunting at night instead of sleeping. Very protective of their territory they leave claw marks on trees, urine scent and faeces, to keep other prying leopards away. In the wild, they can survive for about 12 to 17 years while this span increases to 23 years in captivity. This carnivore has to compete against lions and hyenas that it gets exposed to very often. Hyenas travel in packs and can smell blood from miles away, often endangering the leopard cubs that come out of hiding to feed on kill caught by the leopard mama. But leopards are astoundingly strong, they can climb trees even while they carry their prey. They sneak up and ambush from as far as 13 feet. Sadly these beautiful creatures are dying by hundreds every year, many becoming trophies for dangerous and criminal sports.

A slight difference separates them from another cat family member, the Cheetah. Cheetahs have black spots that are usually solid and round, while leopards have black and brown rosettes that form an exotic animal print. Their coat is a valuable commodity in the international black market, a reason why poachers hunt them down.

Types of Other Leopards in India

There are approximately 12,852 leopards in India, this being the most genetically diverse pool out of all the subspecies in Asia. The highest population is found in Madhya Pradesh with about 3,421 inhabiting this state. Rajasthan has about 635 leopards, with only about 420 residing inside protected areas.

Indian Snow Leopards found in the Himalayan mountain range are active around dawn and dusk. Crepuscular in activity this species prefers the rocky ravines and cliff terrain to gain good cover and clear views. Usually, the leopards reside on jungle trees of the Indian subcontinent but the Jawai leopard found in Pali, Rajsamand, and Udaipur district has made a natural habitat in the rugged and stony granite terrain. As spine-tingling as it sounds the leopards of Jawai live in peace with human settlers, seen mostly residing near the Hindu temples on the rocky hillside. Here the local Rabari herdsmen are part of the wildlife conservation efforts, as they consider the leopards a holy creature. About 50km from Ranakpur, this Jawai bandh area or Jawai dam has gained popularity for leopard safaris in the rural hinterland. Since this area is not a sanctioned wildlife sanctuary the animal has been spotted near human settlements. The Jawai Leopard Trail is one of the most trending and thrilling safaris on the Indian wildlife scene.

Ranakpur is a serene and peaceful valley known for its evergreen pastures; you can easily find it on your maps app or any road map for the state of Rajasthan, it is located on state highway 32. Surrounded by the Aravalli hills, this hamlet enjoys pleasant weather throughout the year. 93km away from Udaipur, one can easily reach here via the well-maintained highway roads that offer beautiful valley views.

It is closest to Kumbhalgarh Wildlife Sanctuary, about 50km away which makes it a sought-after destination throughout the year. Indian visitors travel in close-knit groups and plan road trips to visit Ranakpur and Kumbhalgarh for the diverse flora and fauna in this rich landscape. Found in the Kumbhalgarh sanctuary are wolf, nilgai, jackal, jungle cat, leopards, four-horned antelope, sloth bear, hyena, chinkara, sambhar, and hare. Along with these this valley is home to a wide variety of birds like the grey jungle fowl, dove, parakeets, peacocks, golden oriole, grey pigeons, bulbul, and white-breasted kingfisher. October to June is an ideal time to indulge in bird watching, nature walks, and safaris.

The sighting of this distinctive pink leopard in Ranakpur will draw wildlife admirers who wish to behold this singular wonder; leading to a surge in bookings for Ranakpur hotels in Rajasthan. Since the creature is moving in an unprotected forest area, it is endangered and vulnerable to unethical photographers and poachers. This pink leopard is mature and not a cub hence it seems this genetic mutation has offered successful camouflage to the leopard for it to have survived in the wild. Yet, the forest department plans to increase its monitoring to protect it.

In an overall bid for wildlife conservation of leopards, many hotels in Rajasthan offer jungle excursions with trained naturalists that understand the environment and showcase animals without disturbing their habitat. Mana Hotel in Ranakpur is a contemporary boutique hotel that has always strived to maintain the ecological sensitivity of the region. While upkeeping the green cover of the valley it resides in, the hotel also provides guests with morning and evening safari services, mindfully respecting the peace of nature and its humble residents. All adventure activities are conducted with utmost regard towards wildlife and environmental conservation. Mana also steadfastly believes in uplifting the local community and providing them with a sustainable livelihood for the future.