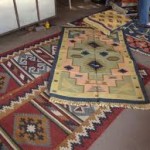 Durries were originally the poor cousins of carpets – meant purely as a utility product and lacked hugely in terms of finesse, design and ornamentation. Most often, they formed the bottom-most layer of the bedding or used as an underlay on the floor. For these reasons, they came in pedestrian designs and colours that tended to bleed.

Interestingly, most of the skilled durry weavers were from areas that came to fall in present-day Pakistan and post the partition of India, they relocated to the North-Western regions of Rajasthan and Haryana. The handloom durry weavers in modern India faced stiff competition from the machine-made durries which flooded the market after 1947 and in order to survive the changing market dynamics, they began to experiment with colour and design. Today, colourful handloom durries are available in beautiful designs. However, one has to concede that the designs mostly limited to geometric or floral and the colours are earthy.