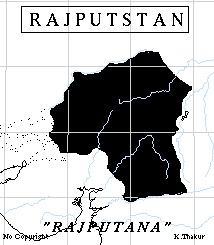 The Rajput clan is portrayed throughout history as warriors, charging out of their strongholds with gleaming swords, facing death with fierce defiance and pride. After all, the Rajput’s carved out kingdoms in the harshest of conditions and built magnificent forts and palaces that are awe inspiring and the landscape of Rajasthan remains beautifully ornamented by relics of their past. Accounts of their bravery, chivalry, and exploits are literally the things that legends are made of. Till the present day, the balladeers of the desert state continue to sing in reverence to the Rajputs, passing down interesting anecdotes of their history through oral traditions.

The question of where the Rajput’s came from is still shrouded in myth. They emerged as the royal clans they are known as in the 5th and 6th century CE and dominated the history of North West India till the medieval era. Recent findings have suggested that the Rajputs were of a mix of indigenous warriors and foreign invaders who had successfully established kingdoms. To manoeuvre their way through the rigid caste systems in place, they performed ritual purifications which enabled them to adopt and reassert their Kshatriya status. Often, they declared themselves the sons of legendary kings or claimed lineage of the Sun and Moon god and it was thus that emerged the Suryavanshi and Chandravanshi clans. Under these two categories, there were six Rajput sects that controlled the regions now known as Rajasthan and Gujarat. They were the Pratiharas, Solankis, Parmars, Guhilas, Chauhans and Kachhwahas.

The Rajputs are renowned for their sense of honour, pride, courage, and chivalry. Owing to the location of their strongholds, they were often under siege by foreign invaders and were a deterrent in the entry of many into India. However, their inability to form a unified political alliances amongst each other, even in the face of foreign forces was the reason for their demise. Not only were they unable to fend off all foreign invasions, but they were also never able to expand their control within India, despite their martial talents and valour.

Under the influence of the Mughals and the British, the Rajputs became increasingly partial to grand lifestyles beyond their means. Their penchant for luxury resulted in indiscriminate expenses on decor and furniture and as forts became redundant, kings began to construct new palatial residences, each more lavish than the other. Even the rivalries between Rajput states became expensive as they resulted in all the more expensive gifts to visitors and a general squandering of money.

In the end, it was their somehow misplaced pride and eventual decadence that resulted at the end of the flamboyant and awe-inspiring Rajputana.