The state of Rajasthan is nothing short of grand. Everywhere you look, you will find a piece of history staring back at you. The beautiful temples which are strikingly devotional, stately forts and monuments which narrate legendary tales of a glorious past, the vibrant festivals and fairs, the mouth-watering cuisine, and the warm hospitality of endearing people make a visit to Rajasthan ‘a visit to remember!’.

Museums can be a great way of peeking into the history of a place and culture as each artifact some interesting tale. The museums in Rajasthan can get you a clear understanding of the rich and diverse culture, traditions, arts, history, crafts, and other notable features of the state. Not only will you have a tryst with a marvelous history, but you also get to behold some of the rarest and finest artifacts to be ever found in the world. 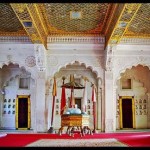 The magnificent Mehrangarh Fort of Jodhpur houses rare and interesting artifacts, textiles, paintings and transport items. The beautiful Palanquin and Howdah Galleries have some of the most captivating historic items that are both old and expensive, on display.

This museum is located in the gardens of Ram Niwas Bagh in Jaipur and is believed to be the oldest in the state. Colonel Sir Swinton Jacob designed the museum in 1876 to welcome King Edward VII on his visit to India. The museum was opened to the public ten years later. The rare articles on display are metal and wood crafts, pottery, arms and weapons, textiles, carpets, paintings of flora and fauna of the state, toys, and dolls. The famous carpet depicting the scene of a Persian garden carpet with running water streams which Raja Jai Singh I purchased from Shah Abbas of Persia is found here. 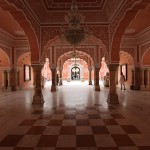 Located within the City Palace complex, the museum is the brainchild of Maharaja Sawai Man Singh II and houses ancestral collections of successive rulers of Amer and Jaipur. Initially, only selective visitors and dignitaries could visit this museum with prior permission. In 1959 this private museum was opened to the public. Visitors started frequenting its two main wings: Pothikhana (which displays rare collection of paintings and over 16,000 volumes of manuscripts) and the Silehkhana (which is a storehouse of ammunition). Later, a textile gallery and a costume gallery were added. 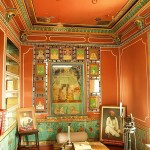 ises of the grand City Palace which stands on the banks of Lake Pichola in the city of Udaipur, this museum was setup in 1890. It is renowned for ‘Mor Chowk’ adorned with beautiful peacock mosaics, Manak (Ruby) Mahal with glass and porcelain figures, Krishna Vilas with beautiful miniatures, Bhim Vilas with its Radha-Krishna wall paintings, Bari Mahal, the central garden, Moti Mahal with outstanding mirror work and the Chini Mahal covered with ornamental tiles.

Setup in the year 1962, it is located within the precin 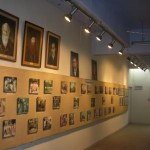 cts of Raj Bhawan. It is a custodian of the immense archaeological wealth of Mount Abu and is known for its exhibits such as tribal weapons, musical instruments and ladies ornaments, miniature paintings on raga-raginis, wood carvings, finely carved out Devdasis or Nartakis (dancers) statues from 6th century to 12th century (belonging to an ancient township called Chandravati). Add to this, the Chapa’s (local heroine of Achalgarh) inscriptions and the Abu Collection that boasts of 404 beautifully-carved sculptures, the most astounding being that of the 3-ft-high Vish Kanya (snake goddess), which is shown breast-feeding a snake.